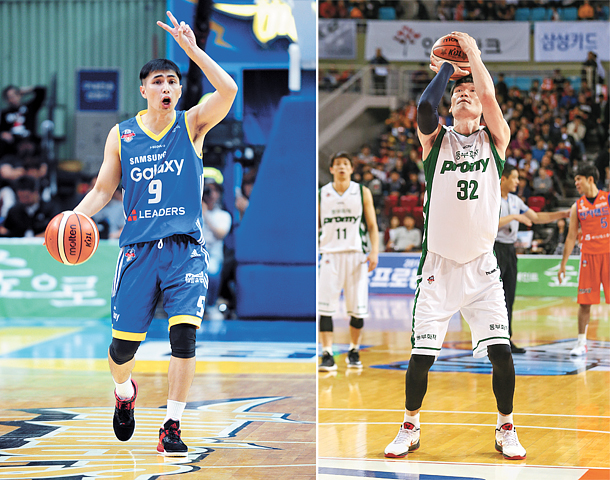 Although well past their prime, the 39-year-old guard Joo Hee-jung of the Seoul Samsung Thunders and Wonju Dongbu Promy’s center, Kim Joo-sung, who turned 37 yesterday, are not yet ready to leave the court behind. They may be seasoned, but the two “Old Boys” of the Korean Basketball League (KBL) can still run and gun and are hoping to break some more records before they hang up their uniforms.

This year marks KBL’s 21st season since its birth in 1997, going into the half-a-year journey starting from Oct. 22. Headlining three super rookies, Lee Jong-hyun of Ulsan Mobis Phoebus, Choi Jun-yong of the Seoul SK Knights and Kang Sang-jae of the Incheon ET-Land Elephants, the KBL has garnered more attention than it’s seen in recent years. However, though the young players such as Lee and Choi are rising to become the future of Korean basketball, old timers like Joo and Kim are still keeping their footing strong in the league.

Debuting in 1997, Joo has witnessed the modern history of Korean basketball. Cho Dong-hyun, who made his pro debut around the same time, has become the head coach of Busan KT Sonicboom and Lee Kyu-sup, Joo’s teammate from college, is now an assistant coach for the Thunders. Joo inked a one-year deal before the season with the Thunders, becoming the first pro baller to play in his 20th season. No one in the history of the KBL has been on the court for so long.

And as the eldest player on the court today, the path he took over the past 20 years has become the history of the KBL itself.

Until last season, Joo has played in a total of 978 games, only missing 12 games throughout his career. He’s 240 matches ahead of Choo Seung-gyun, currently head coach of the Jeonju KCC Egis, who is ranked second in the category with 738 career games. Already having stepped on the court seven times this year, he only has 15 more games to go until he reaches another career milestone - his 1,000th match, a feat expected to be reached on Dec. 23 against Anyang KGC, as long as he does not miss a single match until then. He’s also looking to top the KBL records he holds in steals and assists, which at the moment stand at 1,489 and 5,325. As impressive as these numbers are, though, they are hardly a concern for the veteran guard. “I don’t want to rack up meaningless numbers,” he said. “I want to play and help my team until the last minute.”

Joo, who spent his childhood under the care of his grandmother, still shoots 500 baskets a day, a practice routine he’s done since he turned pro 20 years ago. “My grandmother passed away in 2002, but even today, when I am taking a shot, I still think of her,” Joo said. “Even with her gone, I still want to make her proud.”

And if there is anyone else still active on the court who fans can look to as a piece of living KBL history, it’s Kim, the center for Promy. “I played alongside Huh Jae when I first started to play pro,” recollected Kim. “Now, I play alongside his son, Heo Ung, who used to visit the court and follow me around, calling me ‘uncle.’ I have been playing with him in the pros for three seasons. How time flies.”

Throughout his career, Kim has stuck with the Promy for better and for worse, leading the team during in 2007-08 season when it topped both the regular season and the playoff. A stronghold under the basket for Promy, the 2.05-meter (6-foot-8) center holds the KBL record in blocks, tallying 1,000 last season to become the first player in the league to do so. Right now, he is ranked second in rebounds with 4,189 and third in scoring with 9,561 points. Kim has only 439 points to go until he becomes the third player in the league to score over 10,000 points in one’s career. “I tore a ligament in my left knee last season,” Kim said. “I thought maybe this would be the end of my career, but luckily, my physical condition has gotten better.”

Kim, whose contract with the Promy expires after this season, also said, “When I look at Lee Seung-yuop [40, Samsung Lions] in pro baseball, I cannot help but be impressed. He takes such good care of himself and has been breaking records left and right.