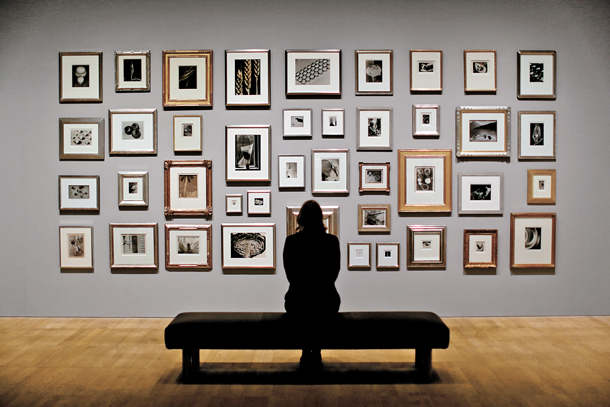 A Tate staff member poses in front of a wall of photographs at “The Radical Eye: Modernist Photography from the Sir Elton John Collection” exhibition at the Tate Modern gallery in London. British musician Elton John’s collection of international modernist photography from the 1920s to 50s includes almost 200 prints and opens to the public today.[AP/NEWSIS]

LONDON - He’s one of the most colorful figures in rock ‘n’ roll, but when it comes to photography, Elton John embraces black and white.

Scores of vintage images from the musician’s collection are on display in “The Radical Eye,” an exhibition opening this week at London’s Tate Modern.

The show displays more than 190 photos that usually line the walls of John’s 18,000 square foot (1,670 square meter) Atlanta apartment, one of his several homes.

If stark black and white seems too plain a palette for a musician famed for outrageous outfits and opulence, fear not - there is playfulness and pizazz aplenty in the show.

John, who once embraced a life of rock ‘n’ roll excess, began buying photographs after he became sober in 1990. In the exhibition catalog, the musician says he replaced alcohol with “a much healthier addiction” that has seen him amass 8,000 images, one of the largest troves of 20th-century photography in private hands.

“Photography became this incredible companion,” John said. “It went hand in hand with my sobriety, which was also fresh and a release. I was like a kid in a candy store.”

The images on display, taken between 1915 and 1950, reflect the period when photography began stretching itself as an artistic medium, and include work by masters of the evolving form.

There are two dozen photos by surrealist Man Ray, including positive and negative versions of his mask-and-face image “Noire et Blanche” that usually hang above John’s bed.

An early purchase was Man Ray’s “Glass Tears,” a close-up of a mannequin’s face crying glass beads. John bought it at a Sotheby’s auction in 1993 for almost $200,000, which was then a record for a photograph. The market has moved on, and photos can now fetch millions. John’s office won’t put an estimate on his collection.

Newell Harbin, director of John’s photography collection, says “passionate” is the best word to use to describe him as a collector.

“His energy is infectious,” she said. “He always surprises me. If it touches his heart, if it moves him, then we collect it.”

Along with the surrealists and experimenters are unflinching documentary photographers including Walker Evans and Dorothea Lange. Lange’s haunting portrait “Migrant Mother,” on display at Tate, helped alert America to the realities of poverty during the Great Depression.

John said he considered Lange’s photo, which hangs in his Atlanta living room, “the ‘Mona Lisa’ of photographs.”

“Her face is so elegant and dignified and yet she’s going through the most horrific of times, trying to feed and clothe her children,” he said.

The exhibition, which opens Thursday and runs to May 7, provides a glimpse of photographic history as well as of John’s artistic tastes.

Co-curator Shoair Mavlian said the photos reflect a pivotal period when, “almost 100 years after the invention of the medium, the photographic language began to emerge.”

“Photography stopped following the rules of painting and began to experiment and create its own visual language,” she said.

“The way we all have a camera on our phone and communicate through photographs today can really be rooted back to this movement,” she said.

Nowadays, physical photos are becoming a rarity. Harbin said she hopes that in an age “where we just look at things online, as jpegs,” people will be drawn to see photos as rich physical objects. They hang in the Tate’s galleries in the often elaborate frames chosen by John for his home.

“He hangs the images within the house salon-style, so it very much is floor-to-ceiling,” Harbin said. “It’s a great way to live. He loves his collection, loves living within his collection.” AP