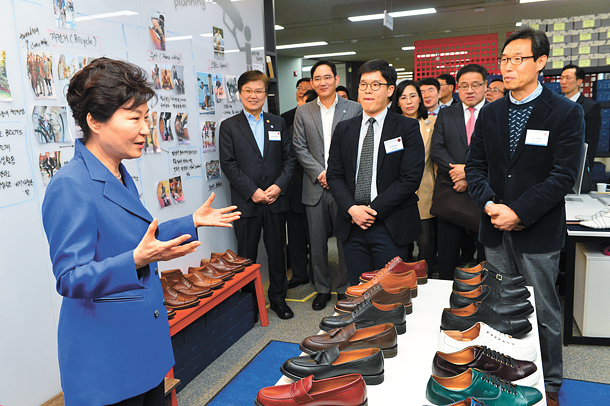 President Park Geun-hye visits the Daegu Center for Creative Economy and Innovation on March 10 in celebration of her third year in office. She spoke to Samsung Electronics Vice Chairman Lee Jae-yong, second from left, and government officials. [JOINT PRESS CORP]

With President Park Geun-hye’s administration paralyzed in a corruption scandal, the 18 nationwide Centers for Creative Economy and Innovation (CCEI), the icon of her government’s key initiative “creative economy,” face a mounting threat.

Suspicions have risen that Cha Eun-taek, one of the key figures in the scandal, peddled influence over those centers, incubators and co-work spaces for start-ups while assuming a top position at one of the two key divisions of the Creative Economy Initiative under the Ministry of Science, ICT and Future Planning.

Rep. Kim Sung-soo of the Minjoo Party said Cha also set up a private company to win contracts to build homepages for CCEIs.

Cha, a former music video and TV commercial director, served from April 3, 2015 until April 7 of this year and was arrested Tuesday by prosecutors.

Adding to the suspicion is the fact that the president’s secret meeting in July with the heads of seven conglomerates was preceded by her lunch with the chairmen and CEOs of the conglomerates behind the CCEI. The president allegedly strong-armed the chaebol heads to donate hefty sums to the Mi-R Foundation and K-Sports Foundation, nonprofits allegedly connected to her longtime friend Choi Soon-sil now under prosecutors’ investigation.

The Special Committee on Budget and Accounts and the Strategy and Finance Committee at the National Assembly on Monday began reviewing 2017 budget plans and opposition lawmakers vowed to slash all the budgets allegedly linked to Choi next year.

The Minjoo Party has already allotted 330 billion won ($286.7 million) for culture and sports, 52 billion won for official development assistance allegedly tied to the two foundations and 140 billion won for the creative economy, as “Choi Soon-sil” budgets.

Rumors have quickly circulated that the CCEIs nationwide may shut down under the worst-case scenario.

The CCEIs are part of partnerships between local governments and top conglomerates or large companies around the country, with the first created in Daegu through a deal with Samsung Electronics in September 2014. Each province and major cities have accommodated one.

Skeptics claimed from the beginning that the centers were the result of the government twisting the arms of Korea’s top conglomerates, who had little interest in participating. Sixty-two percent of the total budget for the CCEIs comes from the government’s pocket, granted by a presidential decree, and the operation of those centers may end should companies behind them also decide to stop funding them next year.

Some centers have already been attacked for underwhelming performance.

“It’s regrettable that people are beginning to associate our center with the hotbed of corruption in the wake of the scandal,” said a representative from one of the CCEIs who declined to be named, “and our achievements are being underestimated and degraded.”

Choi Yang-hee, minister of science, ICT and future planning, visited the Seoul CCEI in Gwanghwamun, central Seoul Wednesday to calm the swelling confusion across the centers.

“The CCEI project is distinct from the Choi scandal,” he told workers there, adding the centers are not supposed to be embroiled in political issues and should be sustained as the new growth driver for Korea.

The minister also told the staff “not to worry so much” and encouraged them to be “more sincere in their duties” under the circumstances, while expressing hope lawmakers would pass the budget proposals without reduction.

Workers at the CCEIs and local governments say the centers said they don’t feel pressure from the unfolding cronyism crisis.

“We are actually busier nowadays as we need to finalize projects under plan near the year’s end,” said a spokeswoman with the CCEI in Jeju, which is in a partnership with Kakao. “It’s true that staff here are anxious about the future of the center, but we have no choice but to carry out what’s ahead of us.”

Representatives from CCEIs in Daegu and Seoul took cautious positions in speculating the future of their centers, only saying they are not currently affected.

A spokesman with one of the conglomerates running the CCEIs said the company will take a wait-and-see stance.