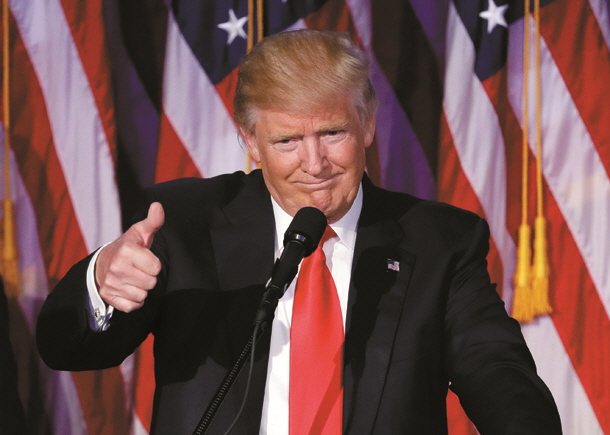 After Donald J. Trump’s upset victory in the U.S. presidential election, Korea’s market was shaken - along with other major markets across the globe.

The main Korean stock market tumbled 45 points Wednesday, down 2.25 percent from the previous day, to close at 1,958.38. This is the first time that the Kospi has gone so low since July 6, when the market closed at 1,953.12 after Britain’s vote to leave the European Union.

The market started off strong, gaining 6.66 points from the previous close to inch up to 2,010.04, but things quickly turned after the results started favoring Trump over challenger Hillary Clinton. Around 11 a.m. the market fell below 2,000, and in less than an hour fell below 1,970. At one point during the day, the Kospi nosedived 72 points or 3.6 percent.

The anxiety accompanying Trump’s victory is expected to continue.

A key concern is Trump’s “America first” position that includes a preference for trade protectionism.

“The market will inevitably face a short-term adjustment if Trump wins,” said Kim Ji-na, a fixed income analyst at IBK Securities. “There’s even a possibility that the 1,900 barrier could fall as Trump’s victory will only raise instability and bring about policy risks.”

The bigger concern is that Korea’s economy, which has been facing tough times due to shrinking exports, will suffer heavily.

“The Trump victory will not only act as a potential risk for the Korean market but also the global economy,” said Hwang Na-young, a Woori Finance Research Institute researcher. “Once Trump and the Republicans take over, most of the major policies of the Barack Obama years will be reversed: repealing Obamacare, huge tax cuts, easing of financial regulations and a preference for fossil fuel.

“Major changes are likely in regards to trade policies as protectionism deepens on top of an isolationist approach to diplomatic polices.”

Hwang said U.S. Federal Reserve policy could even be affected, as Trump has often criticized Fed chair Janet Yellen and even promised to replace her.

“The heightened uncertainties for monetary policy and enhanced protectionism could affect the growth of emerging markets,” she said.

Traditionally the Democratic Party in America favors protectionism and the conservative Republicans advocate free trade. The Democrats were focused on protecting domestic businesses and the rights of laborers. The Republicans believed free trade offered opportunities for American businesses. But that pattern was broken in this year’s presidential campaign. Trump repeatedly raised the need of to renegotiate trade deals.

“If you look at China, and you look at Japan, and if you look at Mexico they’re killing us,” Trump said in an interview with New York Times earlier this year.

There is a possibility the Trump administration could demand renegotiation of the bilateral trade agreement the U.S. has with Korea, especially since the trade deficit with Asia’s fourth-largest economy is the largest among the free trade agreements that the country has.

There are already signs of the U.S. taking a harder line on the trade. It has been slapping anti-dumping tariffs on Asian suppliers, including Korea, Japan and Vietnam.

According to a report by the Korea Economic Research Institute, if the Korea-U.S. free trade agreement is suspended for renegotiation, Korea’s exports will suffer an accumulated loss over the next five years of $26.9 billion. Some 240,000 jobs could be lost.

“The United States recorded a $29.3 billion won trade deficit with Korea last year and the deficit nearly doubled from $13.2 billion in 2011, which is right after the two countries signed the free trade agreement,” said Moon Yong-kwon, an analyst KTB Investment & Securities. “Trump is likely to pursue protectionism and that will have negative impacts on Korean manufacturers, especially in the automotive industry.”

According to Moon, the United States has a deficit in its auto trade with Korea that rose from $8.3 billion in 2011 to $16.3 billion in 2015. He argues that not only politicians but the U.S. public will urge the new president to negotiate some trade deals, blaming them for dragging down the economy.

A trade war could weaken the American economy as a whole, also bringing pain to Korean exporters.

The U.S. is the second-largest export market for Korea after China.

According to an earlier report by the National Foundation for American Policy, Trump’s trade policies will not only affect the global market but also the U.S. economy, as raising tariffs against China and Mexico alone would raise costs for American households, especially lower income households.

The study estimated that such tariffs could cost the bottom 10 percent of households 18 percent of their after-tax income over five years, or $4,670.

Trump’s tariffs on all imports would cost the average U.S. household $6,112 annually and over $30,560 in the next five years, it said.

Concerns about the U.S. election resonated in Korean government and business circles.

At a ministerial level meeting held Wednesday, Korean Finance Minister Yoo Il-ho said it is inevitable that the global economy will “run through uncertainties, as many are not really sure what the U.S. government will end up doing for its economic policies.

“The government will monitor financial and currency markets closely and will continue to have talks with foreign investors and international credit rating agencies so that they don’t misunderstand our economic and financial situation,” Yoo said. “We will continue to emphasize that the two countries are traditionally strategic allies and economic partners and that the relationship needs to continue to prosper from now on.”

The Korea International Trade Association (KITA) Wednesday released a statement saying that amid the low growth of the global economy and shrinking trade, Trump’s protectionism and “America first” policy will impose a heavy burden on the global economy.

“Although Trump’s campaign promises will be difficult to execute as policies, there is a possibility that if [the U.S.] take protectionist actions it will spark retaliatory actions by other countries that could deepen global protectionism.

“This will have a huge influence on Korea, which has a high dependence on trade,” KITA said in a statement.