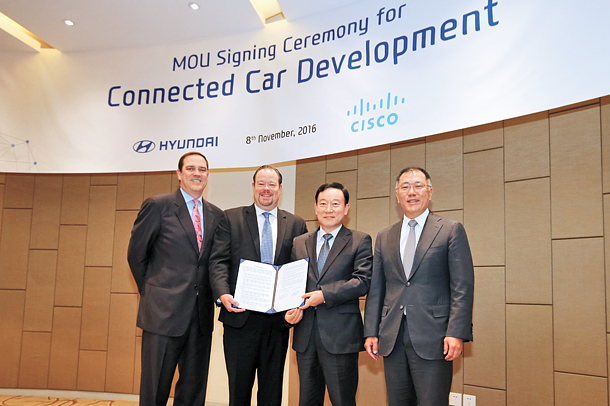 Hyundai Motor is building its first overseas big data center in China to speed up development of a so-called connected car, a concept car that will be capable of diverse data analysis.

The center will start operations next June in Guian New Area, China’s center for big data in Guizhou Province.

The Korean automaker has been working on an intelligent car that it calls a “high-performing computer that runs on roads” since earlier this year.

Data analysis in a car could be used to share data among auto parts such as engine and gears. Traffic-related information and infotainment functions could be offered as well.

Guian New Area was designated a core business area for the big data business by the Chinese government last year. To attract IT giants, the Chinese government is also providing incentives such as leasing out office space for free. Global giants including IBM, Intel, Qualcomm and Amazon are moving into the area. Hyundai is looking for chances to collaborate with them in connected technology.

The carmaker signed a memorandum of understanding to co-develop connected car tech with Cisco Systems, an American networking hardware and telecommunications equipment provider, on Tuesday.

“There has been a new shift in the automaking industry and it’s become important to process massive data into meaningful information,” a Hyundai Motor spokesperson said. “The establishment of the center will not only be a foundation for our connected car research but will also be a chance to renew our brand image into an automaker with leading IT technologies.”

The automaker set up a research lab in Pangyo, Gyeonggi in July. In October, it proposed plans to establish an independent connected car platform called Connected Car Operating System by 2020.

With the data center in China as a start, it will build more centers overseas to collect more data. In Korea, the automaker built a big data center in Uiwang, Gyeonggi, three years ago.