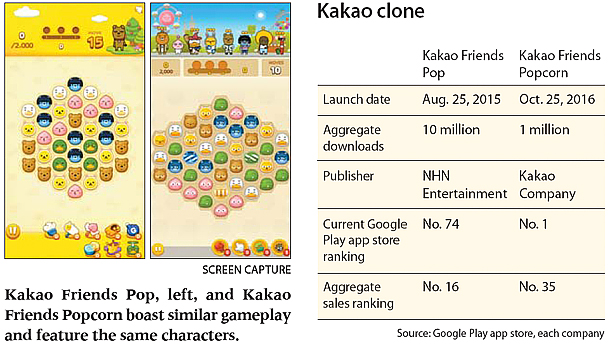 While both games boast similar names and gameplay, they were actually developed by two different companies. Kakao Friends Pop was released by NHN Entertainment, and Kakao Friends Popcorn was launched later by the Kakao Company. The two are now in the middle of a scuffle over intellectual property rights as both games share undeniable similarities that are apparent even to users.

Kakao Friends Pop was released on Aug. 25 last year and quickly gained great popularity among mobile users, accumulating over 10 million downloads by March this year. It was developed by Pixel Cube, an affiliate of NHN Entertainment, after it bought the rights from messaging app developer Kakao to use the Kakao Friends characters.

The game maintained its spot on the top 10 list for mobile games in the Google Play app store for up to 14 months. “NHN Entertainment totaled more than 65 billion won [$56 million] in aggregate turnover,” Namkoong Whon, director of Kakao Game, wrote on his Facebook account. The revenue largely came from the in-app items that people can buy.

Controversy erupted when the Kakao Company launched its own Kakao Friends Popcorn game on Oct. 25 this year. Although the contract between NHN Entertainment and Kakao said the latter was free to develop similar games with other companies three months after Kakao Friends Pop’s release, it appears they did not meet eye-to-eye on the definition of “similar game.”

When Popcorn was released, many mistakenly thought it was a sequel to Friends Pop. After all, the basic rules of the game were the same, the characters used were the same and the name was not that far off. While the Kakao Company acknowledged the similar-sounding name, the company insisted it had done nothing wrong since “the three-match game format [games in which users clear rows of three blocks] has been around since Hexa, which was the first of its kind.”

NHN Entertainment, though, doesn’t buy the argument. “It is regrettable that Kakao has let us down as a business partner,” said Kim Gye-young, a company spokesman.

NHN Entertainment is not planning to take any legal action against Kakao, but the company has expressed discontent with the current situation. NHN Entertainment and Kakao are already up in arms over the rights to the app’s system for adding friends to the game, a case that went to court in May and is expected to conclude next year.

Intellectual property disputes are becoming ever frequent as more companies jump into online content and the line between copyright infringement and adopting a similar concept is blurred. Many smaller developers are struggling to defend themselves against plagiarism, and the two Kakao Friends games are simply the latest examples.

“Kakao has turned its back on their partnership during a vulnerable time when Chinese companies are constantly seeking the chance to infiltrate the Korean game market,” said Rhee Dae-woong, a professor of game design and development at Sangmyung University in Seoul. “Seeing how the game industry is struggling to find talented people, this could severely harm the morale of game developers.”

The professor also pointed to the dominance of large platform providers like Kakao as the cause of the disputes, saying that big players take advantage of small game developers by forcing them to adapt to their platform.

Legal disputes in the game industry are nothing new, but previous fights were mostly between a Korean company and foreign company, such as the case between IMC Games, the developer of a mobile game called Tree of Savior, and its Chinese copycat.

Big Korean developer NCsoft was also recently embroiled in a dispute with a smaller local developer called ITS Games. NCsoft, producer of Lineage, a massive multiplayer online role-playing game, sued ITS Games in October after the latter released a mobile game called Aden in July, for copying the names of game items and the system used in Lineage. The case is still pending in court.