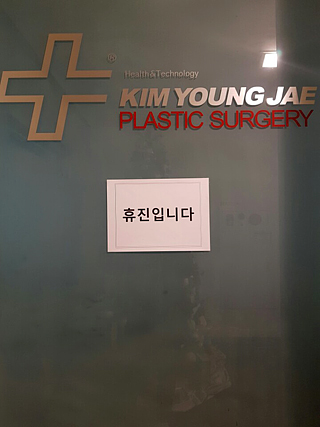 The Kim Young Jae Plastic Surgery clinic in Gangnam District, southern Seoul, closed with a note on the door that reads “Not seeing patients.” [JOONGANG ILBO]

The Blue House was involved in helping one cosmetic surgery clinic, allegedly frequented by Choi Soon-sil and her daughter, to expand its business overseas - and when its attempt to help the clinic was impeded, it went after a consulting firm that graded the clinic as unsuitable for business expansion, broadcaster JTBC reported Tuesday.

It is reported that then-presidential senior secretary for economic policy, Cho Won-dong, hired a consulting firm in February 2014 to assess the clinic, Kim Young Jae Plastic Surgery in Gangnam District, southern Seoul, in order to include it in the government aid program for overseas market expansion.

When a consulting firm assessed the clinic as being unsuitable for government assistance, the Blue House reportedly moved to punish the firm with an unplanned tax audit.

Cho was dismissed in June 2014 in part due to his failure to put the clinic on a list of government sponsorship, according to JTBC, an affiliate of the Korea JoongAng Daily.

The head of the consulting firm, Lee, was quoted as saying in the report on Tuesday that Cho was dismissed from his position because President Park Geun-hye was unhappy that the clinic had not been recommended to receive government aid for overseas expansion.

The consulting head reportedly disqualified the clinic for sponsorship because it hadn’t met business qualifications.

The clinic’s patient register listed the name Chung Yoo-yeon, the name used by Choi’s daughter before she changed it to Chung Yoo-ra, and her mother Choi Soon-sil, who is at the center of a controversy that is threatening the survival of the Park Geun-hye government.

In what is now seen as retribution, Lee said her company was put under an extensive audit for no apparent reason. And her husband and two brothers, all government workers, were demoted in their work.

The latest revelation further shows the extent to which Choi has exploited the government for her self-interest by using her relationship with President Park, with whom Choi has had close ties since the 1970s.

The web page of the clinic was shut down Wednesday due to heavy traffic sparked by the JTBC report.

The two companies were among those invited by the presidential office for Park’s overseas trips including her visit to France in May.

The clinic opened in 1993 and is said to have focused on an exclusive circle of patients.

The Tuesday report follows growing rumors that President Park was a frequent visitor to the clinic and that she was actually at the clinic receiving treatment on the day of the Sewol ferry sinking on April 16, 2014.

The Blue House’s longstanding refusal to make public Park’s schedule on the early hours of the accident, known as the “lost seven hours,” has spawned a number of theories.

Bereaved families of the 304 victims of the Sewol sinking and opposition lawmakers have demanded the presidential office disclose Park’s itinerary during those hours.