Controversial commercial director returns to Korea and is arrested

Controversial commercial director returns to Korea and is arrested 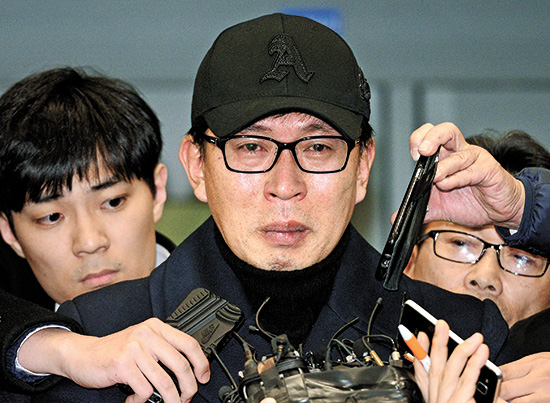 Cha Eun-taek, a former TV commercial director, speaks to reporters at Incheon International Airport Tuesday night. Prosecutors arrested him upon his arrival from China and took him in for questioning. [NEWSIS]

Cha Eun-taek, one of the key suspects in a scandal over influence exerted by a friend of the president, returned to Korea Tuesday night after months on the run in China.

Cha, 47, is the de facto head of the Mi-R foundation, suspected to have been created by the powerful friend of the president, Choi Soon-sil. The foundation amassed 48.6 billion won ($42.8 million) in donations within two days of its launch in October last year.

“I apologize to the people. I will tell everything truthfully to the prosecutors,” said the teary TV commercial director in a shaky voice before a throng of reporters at Incheon International Airport after his landing at around 9:50 p.m. from Qingdao.

When asked about his relationship with Choi, the controversial friend of President Park whose relationship dates back to the 1970s, Cha only said he was “sorry.”

Cha was arrested by prosecutors upon landing and taken to the Seoul Central District Prosecutors’ Office. He was grilled from 1 a.m. until 5: 30 a.m. Wednesday and then transported to a detention center in Guro District, southwestern Seoul.

He is scheduled to be brought back for questioning later in the day.

Cha was nicknamed “crown prince” in culture circles because of his apparent influence in the Park Geun-hye administration. President Park appeared at many of the events he was involved in.

As the so-called Choi-gate scandal unfolded, a torrent of reports described Cha’s power, which derived from his relationship with the 60-year-old Choi, who is being detained under a pre-trial warrant.

Choi is accused of meddling in state affairs, embezzling funds of two nonprofit foundations and the acquiring of classified presidential information.

Cha is suspected to have appointed officials at the Mi-R and K-Sports foundations and even at the culture ministry.

Prosecutors are looking into whether Cha took bribes from government officials. He is also suspected to have forced the owner of an advertising company to hand over the firm’s ownership to a company run by him in collusion with An Chong-bum, former presidential senior secretary for policy coordination, who is also being detained under a pre-trial detention warrant.