Key Choi-gate figure comes in from the cold

Key Choi-gate figure comes in from the cold 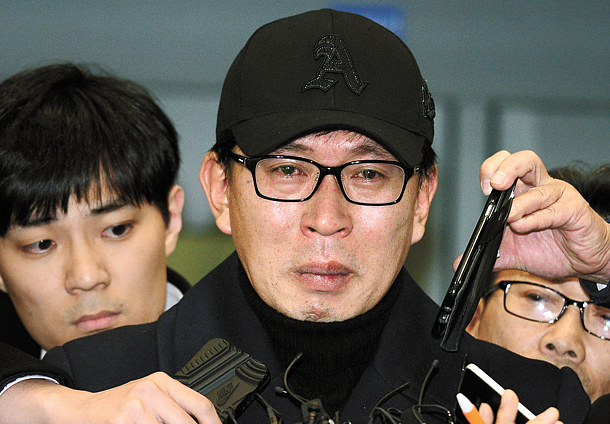 Cha Eun-taek, a key suspect in the scandal over influence exerted by a friend of the president, returned to Korea Tuesday night after 39 days on the run in China.

Cha, 47, is the de facto head of the Mi-R foundation, suspected to have been created by the powerful friend of the president, Choi Soon-sil. The foundation amassed 48.6 billion won ($42.8 million) in donations within two days of its launch in October 2015.

“I apologize to the people. I will tell everything truthfully to the prosecutors,” said the teary television commercial director in a shaky voice before a throng of reporters at Incheon International Airport after his landing at around 9:50 p.m. from Qingdao.

When asked about his relationship with Choi, the controversial friend of President Park Geun-hye, whose relationship dates back to the 1970s, Cha only said he was “sorry.” On his relationship with An Chong-bum, the former presidential senior secretary for policy coordination suspected of having conspired with Cha in influence-peddling, the disgraced commercial director said, “I know him just a little.”

Cha was arrested by prosecutors upon landing and taken to the Seoul Central District Prosecutors’ Office. He was grilled from 1 a.m. until 5: 30 a.m. Wednesday and then transported to a detention center in Guro District, southwestern Seoul. Prosecutors brought Cha back to the prosecutor’s office for the second round of questioning at around 10 a.m.

Cha was nicknamed “crown prince” in culture circles because of his apparent influence in the Park administration. President Park appeared at many of the events he was involved in.

As the so-called Choi-gate scandal unfolded, a torrent of reports described Cha’s power, which derived from his relationship with the 60-year-old Choi, who is being detained under a pre-trial warrant.

Choi is accused of meddling in state affairs, embezzling funds of two nonprofit foundations and acquiring classified presidential information. Cha is suspected to have appointed officials at the Mi-R and K-Sports foundations and even at the culture ministry.

Prosecutors are looking into whether Cha took bribes from government officials. He is also suspected to have forced the owner of an advertising company to hand over the firm’s ownership to a company run by him in collusion with An Chong-bum, who is also being detained under a pre-trial detention warrant.

A prosecutor involved in the case told reporters the prosecution was likely to file a pre-trial detention warrant with a local court for Cha on charges that he strong-armed the owner of the advertising company in collusion with An. He is also accused of embezzling funds from his advertising company.

In a widening investigation into the Choi scandal, prosecutors on Wednesday demanded a pre-trial detention warrant for Song Sung-gak, former director of the state-run Korea Creative Content Agency, for colluding with Cha in the advertising company takeover. Song is known as Cha’s mentor and is suspected to have been picked to lead the content agency thanks to Cha’s support.

Prosecutors on Wednesday raided homes of two of President Park’s former aides, Lee Jae-man and Ahn Bong-geun, two of so-called “three doorknobs” in the Blue House, a nickname that references their access to the president. Lee and Ahn, whose resignations were accepted by President Park on Oct. 30, are facing accusations that they helped Choi Soon-sil interfere in state affairs by giving her classified materials and access to the Blue House without security clearance.

Jeong Ho-seong, the third “doorknob,” is already being detained on a pre-trial warrant on charges of leaking classified material to Choi. Prosecutors are expected to summon Lee and Ahn for questioning soon.