Opposition says no to Park’s offer on prime minister

Opposition says no to Park’s offer on prime minister 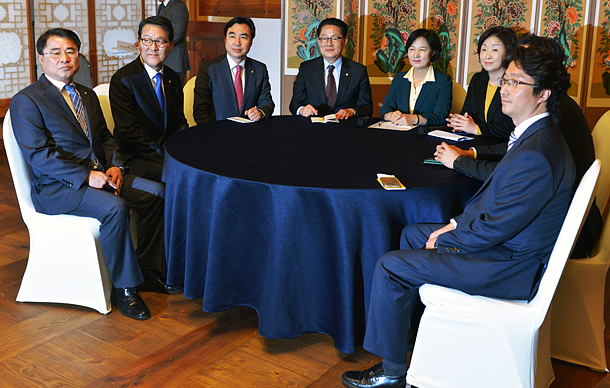 Leaders of three opposition parties meet at the National Assembly on Wednesday to discuss how to respond to an offer President Park Geun-hye made Tuesday. [NEWSIS]

Three opposition parties on Wednesday said President Park Geun-hye has not gone far enough in relinquishing power and said they would take the leadership crisis to the streets to force her to do so.

The heads of the Minjoo Party of Korea, People’s Party and Justice Party held a meeting in the morning to discuss an offer Park made Tuesday to save her presidency, which is endangered by a scandal over the influence in state affairs exerted by her friend Choi Soon-sil. The president visited National Assembly Speaker Chung Sye-kyun Tuesday and asked the legislature to recommend a new prime minister.

But she did not say how much of her own power she would cede to the new prime minister.

The three parties, which together control a majority in the National Assembly, said they will actively participate in street protests on Saturday to condemn Park.

Stressing that the scandal should be labeled Park-Choi-gate to specify the president’s responsibility - many newspapers have dubbed it Choi-gate - the opposition leaders said prosecutors must investigate charges of abuse of power and influence peddling thoroughly.

They also agreed to speedily conduct an independent counsel probe and an additional National Assembly investigation.

“The upcoming rally on Saturday will be incredibly important because we can confirm the people’s will,” said Rep. Youn Kwan-suk, spokesman of the Minjoo Party. “The three opposition parties will actively participate with the people.”

He said the opposition leaders didn’t even bother to discuss who should be recommended as the new prime minister following the president’s concession. “It was meaningless to have a specific discussion on this matter,” he said.

The opposition leaders said they rejected Park’s proposal because of its ambiguity. They feared that Park will continue to intervene in state affairs unless she publicly declares that she will no longer run the government.

“The opposition parties patiently urged her to surrender her right to run the government and hand over her nomination right of the prime minister to the legislature,” Minjoo Chairwoman Choo said. “But the president is insisting on running the government or refusing to step down.”

Rep. Park, acting chairman of the People’s Party, said the president must clearly state what her position would be if a new prime minister is appointed. “She must clearly specify the scope of the authority of the new prime minister,” he said. “Unless she answers that question, we have to join the candlelight vigil on Saturday.”

Earlier in the morning, Park told KBS radio that the president was trying to buy time with her ambiguous proposal to the legislature. “The president just passed the responsibility to the National Assembly.

“Now the ball is in our court, and she avoids revealing her next move. This is a tactic to buy time,” he said.

He also said Park must surrender her Saenuri Party membership, formally recant her earlier appointment of Kim Byong-joon as prime minister and sit down with the opposition leaders to find a way to fill the power vacuum.

When the president made her proposal to the National Assembly, Park said, public attention was diverted from the Choi scandal to who would be prime minister.

“In fact, more than 10 people are now being mentioned by the media as possible candidates,” he said. He said it was a political trick by the president to avoid the scandal.

Park’s presidency is hanging by a thread as her approval rating plummeted to a record low. Park made two public apologies - lasting 90 seconds on Oct. 25 and about nine minutes last Friday - in order to salvage her sinking presidency.

She also nominated politicians with ties to liberal presidents of the past as her new prime minister and chief of staff.

While Park struggled to hold onto her presidency, tens of thousands poured into the streets to demand her resignation.

Thousands gathered at Gwanghwamun Square on Saturday evening, and a larger demonstration is planned for the coming Saturday. Organizers said they want to attract 1 million.

“The fastest way to resolve the crisis is Park’s immediate resignation and speedy election of a new leadership,” Ahn said. “Mayor Park and I agree on this.”

“The people’s demand is the president’s immediate resignation,” Mayor Park said. “Politics, in the end, is respecting the people’s will and realizing it.”

The Blue House said Wednesday that Park will allow the new prime minister to exercise control over the cabinet and propose appointments and dismissal of ministers.

It specified that the prime minister’s authority will be exercised “within the framework of the constitution,” a de facto declaration that Park will keep her presidential prerogatives.

Opposition parties want Park to publicly declare that she will be a president in name only and no longer run the government. They said Park should also surrender her power to appoint and fire ministers to the prime minister.

The ruling Saenuri Party said the opposition parties are acting irresponsibly. “Do they want to strip the president naked in front of the people?” Rep. Chung Jin-suk, floor leader of the Saenuri Party, told the JoongAng Ilbo.

“The country may face a tsunami after Donald Trump’s election in the United States but the opposition parties have zero sense of responsibility to deal with the crisis.

“We accepted all demands - from a constitutional amendment to an independent counsel investigation, a nonpartisan prime minister and a national unity cabinet - but the opposition parties change their demands every time we make a concession,” he said in a message posted on Facebook.