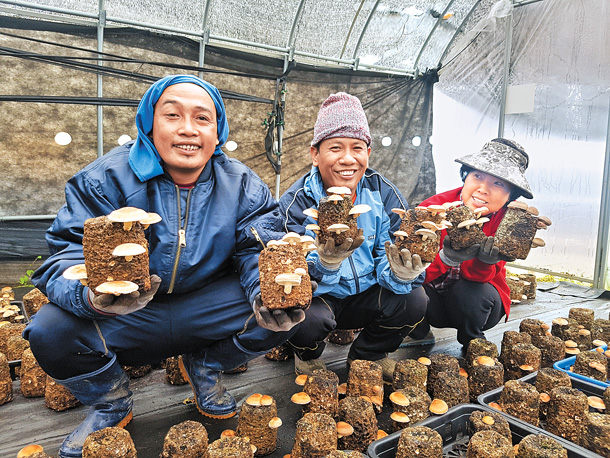 Seasonal workers from the Philippines pose for a picture at a mushroom farm in Yanggu County, Gangwon. [PARK JIN-HO]

Lim Geum-taek, the owner of a kimchi factory in Goesan County, North Chungcheong, recently had to use body language to explain how to use cabbage cutters and water tanks as seven of his new workers hail from Jilin Province, China.

Lim and his crew were busy wrapping 18 tons of salted cabbages to be shipped to local markets in preparation for kimjang, or kimchi-making season.

The 891 square-meter (9,590 square-feet) factory produces an average of 320 tons of salted cabbages annually, which amounts to roughly 400 million won ($350,232) in sales. Despite steady sales, however, the factory was always short-handed during kimjang season, as senior adults constitute 29 percent of the total population in Goesan.

Lim, 58, explained that he is the second youngest person in the village, as most residents are in their 70s and 80s. But after the Goesan County Office implemented a program with Jilin Provincial Government to import Chinese workers, things got easier.

“I had difficulties recruiting workers in an aging village,” said Lim with a smile. “But supply has become much easier now that Chinese workers in their 30s come during the busiest season.”

Under the program, foreigners can obtain C4, or short-term employment, visas in order to stay and work up to 90 days in Korea.

Pocheon in Gyeonggi and Eumseong County in North Chungcheong are also undergoing administrative procedures to introduce the program.

In Yanggu County, Gangwon, a group of 28 Filipinos are currently employed at a mushroom farm.

A 40-year-old worker named Erwin said, “I grow onions in the Philippines but this year’s typhoon left me with nothing. I came here to support my family, as well as to experience Korean culture.”

As word spread that Koreans in rural areas are generous and caring, competition for the program increased. The workers receive 1.35 million won monthly for eight hours of work each day, while the county office provides them with accommodation.

Owners of local farms and factories largely support the program, but insist that local governments increase the length of workers’ stays, which is now limited to 90 days.

“I couldn’t make long-term plans for the farm due to a lack of any steady workforce,” a mushroom manufacturer named Kim Yeon-ho said, “but with the seasonal workers coming in now, I can plan ahead. In order for the program to succeed, however, workers should be able to work at least six to seven months during the busiest seasons from April to October.”

“Apart from the seasonal hiring program, the employment license program allows only 6,600 foreigners to work in Korea,” said Kim Jeong-seob, a researcher at the Korea Rural Economic Institute.

“The period for employment licenses should be doubled to secure a large-scale manufacturing workforce in rural areas.”

“The demonstration project will be run until the end of this year to see if the program is abused in any way,” said an official from the Ministry of Justice, “but we hope to meet local demands by consulting with the Ministry of Agriculture, Food and Rural Affairs, as well as with local governments.”