The Promy are coming out of an 88-73 win over Anyang KGC, during which import Rod Benson, who is in his sixth season in the Korean Basketball League (KBL), led the team with 20 points and 12 rebounds. Another import, Wendell McKines, also tallied a double-double, putting up 19 points while grabbing 13 rebounds.

With the imports doing their jobs as the team’s main scorers, the Promy look solid this season in every aspect of the game. Aside from the two Americans, the Promy have two homegrown franchise stars. Guard Heo Ung, the son of legendary ball player Huh Jae, has been averaging 11.50 points and 3.2 assists this season while center Kim Joo-sung has been a stronghold under the basket, averaging seven rebounds and 0.5 blocks so far this season.

For the Knights, who have two wins and four losses from the league this season, they are coming off an 82-91 loss to the Incheon ET-Land Elephants. Terrico Whites, a guard from Ole Miss, has scored a game high of 45 points, but his effort was for naught, as no one else on the team other than Kim Sun-hyung, who put up 11 points on the board, scored more than 10 points.

So far, capturing four wins while suffering two losses since the 2016-17 league started last month, the Promy have the upper hand in their head-to-head record against the Knights with 39 wins and 27 losses.

Goyang Orion Orions are looking to extend their three-game winning streak, as they are slated to play against fourth-ranked Anyang KGC tomorrow on the road.

Since their 12-point win over Ulsan Mobis Phoebus on Nov. 4, the Orions have had difficult games, taking down the Incheon ET-Land Elephants with a two-point lead on Sunday and then grabbing a narrow one-point victory over the Changwon LG Sakers on Wednesday.

Aaron Haynes led the team on Wednesday by putting up game-high 39 points on the board.

Despite the impressive number on the board, the Orions struggled defensively, grabbing only 31 rebounds as a team while the Sakers took 42 balls off the rim.

In order to come out with a win over the KGC, the Orions will have to play solid defense. The KGC will try to escape their two-game slide. 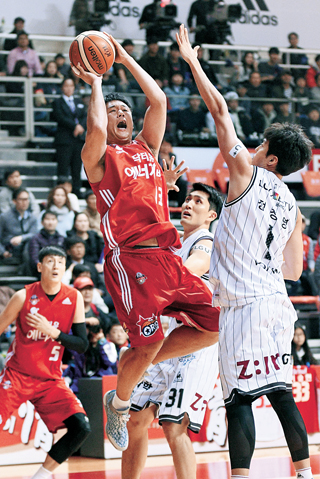