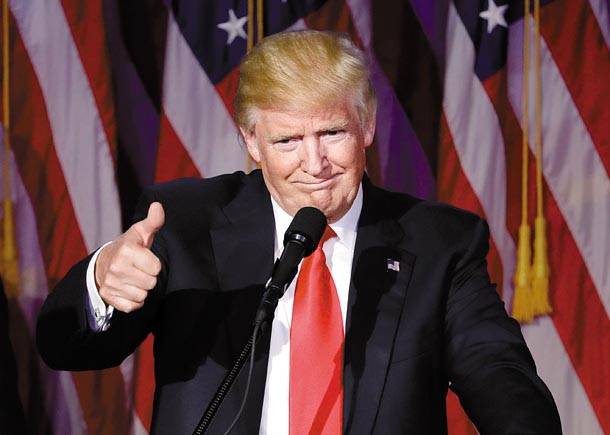 The U.S. presidential election, which had captured the attention of the world for over a year, concluded with an unexpected result: the victory of Republican nominee Donald J. Trump. As the Trump campaign celebrates, Hillary Clinton and the Democratic Party are in shock. International stock markets and foreign exchange markets plummeted after the stunning election results.

The international community had been watching the election closely. Now that it is over, questions still linger. Will the United States remain the leader of the free world? Has its willingness to lead diminished? The United States and its president-elect, Donald Trump, need to answer these questions.

In this election, Trump took nearly every swing state in spite of various scandals and deplorable personal qualities. That is because Clinton failed to create an active support group by delivering positive messages about American society. She did not propose a clear vision of the kind of America she would create and the direction it would take. One piece of proof is that turnout among minority voters was lower than what Clinton had hoped.

Clinton allowed Trump’s victory by relying too heavily on his personal gaffs, the division between Trump and his party, and President Obama’s popularity. Meanwhile, Trump sent a clear and consistent message to Americans: isolationism and a return to trade protectionism. He repeatedly emphasized that problems came from a sluggish economy and polarization.

Here begin the concerns of the international community, including Korea. The worrisome idea of going back to the kind of isolationism that America had pursued before World War II may become reality.

Throughout the campaign, Trump asked why the United States had to play the role of “world police” and assume such high cost and sacrifice. Trump was not the only one. Ted Cruz, his rival in the Republican primary, also advocated an “America First” platform. Democratic Senator Bernie Sanders, too, argued for reducing America’s role in the international community.

All this against a backdrop of the trauma of the Iraq War and aftermath of the financial crisis. Americans have changed their stance from playing an active role on the international stage to resolving domestic issues first.

Just as in other countries, the side effects of neoliberalism — economic disparity and the decline of traditional industries — began to show in the United States in 2000. But American politics missed out on addressing those issues. The focus of President Obama’s election and re-election campaign was not economic class but race. The friction between winners and losers of neoliberalism had not been politically expressed or resolved and exploded in this election.

The Republican Party now holds a majority in both the Senate and House of Representatives. Naturally, Trump’s isolationism can progress rapidly. But Trump is not on good terms with mainstream Republicans, and his political assets are quite scant. The various policies he has mentioned are not likely to become actual policies anytime soon. Even if Americans don’t want to, there are many international issues that the country cannot stay out of due to its own interests. Nevertheless, the basis of isolationism and nationalism that allowed Trump’s election will affect American politics.

A more serious concern is the worldwide expansion of isolationist sentiment. A few months ago, the United Kingdom voted to leave the European Union. Neoliberalism is being torn down, and the conservative parties that promoted neoliberalism 30 years ago are leading the charge. The trend is likely to influence elections in Germany and France next year. The tactical positions of developed countries are likely to change drastically. The influence of Europe as a union is already weakening rapidly.

In the meantime, Russia wants to expand its hegemony over the Ukraine and Georgia. North Korea, Syria and the Islamic State still remain concerns that require consistent international cooperation. Trump’s victory produced more uncertainty than resolution. The election may be over, but America’s path has not yet been decided.


*The author is a research fellow at the Asan Institute for Policy Studies.