Retail sales increase in most cities

Retail sales increase in most cities 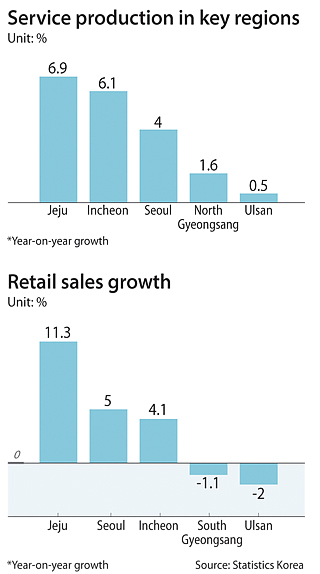 The nation’s retail sales rose in all major cities and provinces except Ulsan and South Gyeongsang, where corporate restructuring is under way.

Third-quarter retail sales in 12 cities and provinces including the southern island of Jeju and Seoul rose, while Ulsan and South Gyeongsang saw sales drop, the government said on Thursday. Jeju and Seoul saw the biggest year-on-year increase in retail sales as they have had more foreign tourists.

Retail sales for the southern port city of Ulsan dropped 2 percent year on year in the third quarter and sales for South Gyeongsang fell 1.1 percent in the same period. Shipping and shipbuilding companies are concentrated in this region and the regional economies have weakened largely due to corporate restructuring.

“Sales at department stores fell 7 percent in Ulsan and sales of gasoline-related products and automobiles in South Gyeongsang dropped 6.9 percent,” said Sohn Eun-rak, a director at the statistics agency.

“The ongoing corporate restructuring and earthquakes that hit the Ulsan region might have had an impact on the consumption as well,” an official at Statistics Korea said.

Production in the services sector rose in all 16 major cities and provinces, but Ulsan again had the lowest growth rate in the third quarter.

Service production rose the most in Jeju at 6.9 percent and was followed by Incheon at 6.1 percent. Ulsan inched up just 0.5 percent.

“Production in the financial and insurance sectors in Jeju and Incheon rose significantly,” said Sohn at the statistics agency. Ulsan, however, saw the lowest growth, as production in the science and engineering sectors has weakened.

Meanwhile, the state-run think tank also warned that consumption continues to be sluggish in Korea.

“Services production growth showed a moderating slowdown influenced by the massive recall of a new mobile phone and the restructuring of the shipping industry,” Korea Development Institute said in a report Monday.