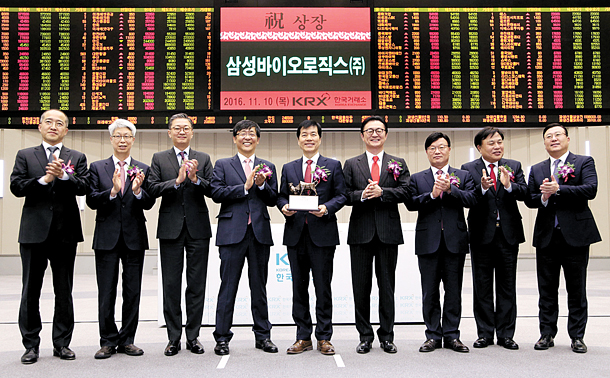 Samsung BioLogics became the first Korean company with a deficit to successfully list on the Kospi index on Thursday. The initial public offering of the drug maker is not only the largest in the Korean market this year but also the second largest in the world after Dong Energy’s $2.6 billion listing on the Copenhagen Exchange in June.

Shares of the biopharmaceutical arm of Samsung Group, which has been posting a deficit for five straight years, went up 6.67 percent from the beginning of the day to close at 144,000 won ($125). Until recently, Korean stock market regulations barred companies with deficits from listing.

With the IPO, Samsung BioLogics has raised 9.53 trillion won, ranking 29th by market capitalization on the primary market. The pharmaceutical company was hoping to raise 2.25 trillion won from the IPO.

Samsung BioLogics struggled the moment the market opened. The stock tumbled more than 7 percent from 135,000 won to 125,500 won. But 17 minutes in, the share prices turned around and at one point during the day rose as much as 9.63 percent.

After Donald J. Trump was elected president of the United States, pharmaceutical and biotechnology shares soared on Wall Street as he has been more laid back then his opponent Hillary Clinton on drug prices, particularly since Clinton has called for tougher restrictions. Trump has also been in favor of wider access to imported, safe and dependable drugs.

Market analysts expressed optimism about Samsung BioLogics’ future. “The global biopharmaceutical is expected to grow,” said Woo Chang-hee, IBK Investment & Securities analyst. “The global market, which was $164.2 billion in 2012, is expected to grow to $219.5 billion by the end of this year, which is a 7.2 percent increase even when compared to a year ago. By 2025, it is likely to further expand to a $488.8 billion market.”

Samsung BioLogics is the brainchild of Samsung Group Chairman Lee Kun-hee. In March 2010, when he returned to lead the conglomerate after serving a nearly two-year sentence for tax evasion, one of the first things he did was list future growth industries that the leading Korean conglomerate could pursue to secure sustainable growth beyond just smartphones.

The following year, Samsung BioLogics was founded. Since then, the group has invested heavily on its biopharmaceutical unit, most recently opening its second production plant in Incheon in September.

Samsung BioLogics is now the third-largest drug manufacturing company in the world after Switzerland’s Lonza and Germany’s Boehringer Ingelheim. Those rankings are expected to change in the coming years as the company broke ground on its 850 billion won third plant in Incheon late last year. The facility is slated for completion by the second half of 2018.

With the new plant, Samsung BioLogics will have production capacity of 360,000 liters, outstripping Lonza (260,000 liters) and Boehringer Ingelheim (240,000 liters).

“In the last 40 years, the electronics and IT industry led the global economy,” Kim said, “but in the next 30 to 40 years, health care, particularly the biotech industry, will lead growth.”