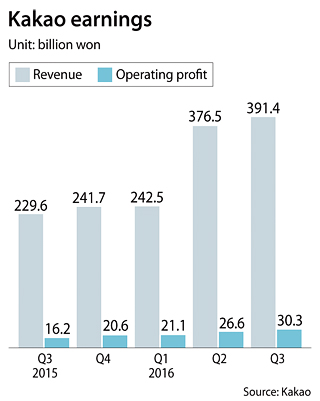 Kakao’s operating profit in the third quarter shot up 87 percent from a year earlier to 30.3 billion won ($26.3 million) on the back of robust content sales in its music streaming service and mobile games.

Revenue also surged 70.5 percent over the same period to 391.4 billion won, according to earnings results released by the company on Thursday. Net profit, though, fell 7.7 percent to 13.6 billion won.

While revenue from advertising, which formerly accounted for the biggest share, slumped 13.5 percent year on year to 126.9 billion won, revenue from content jumped 187.2 percent to tally 78.5 billion won. Kakao, operator of the country’s most widely used messaging app, attributed the advertising decline to a low season in the advertising market as well as recent efforts to remove inefficient network ad traffic.

As of the third quarter, the company’s content business contributed to half of the entire revenue pie. Among the various types of content, music sales and streaming through its MelOn service earned Kakao 95.5 billion won. The company acquired MelOn from Loen Entertainment in March, and revenue from the service was reflected for the second time this quarter.

Publishing and commission fees for distributing mobile games from other developers on its Kakao Game platform brought in 78.5 billion won.

Notably, revenue from other sectors skyrocketed 377.6 percent to 66.1 billion won, which Kakao said came from the huge popularity of its brick-and-mortar Kakao Friends character stores that sell dolls and sundries as well as the feature on KakaoTalk that allows users to exchange gifts.

During a conference call Thursday, Kakao put analysts and investors at ease by announcing a change in its pursuit of on-demand services like renting cars and delivering food. Rather than launch and operate its own on-demand services, Kakao said it would allow existing or new service operators to use the KakaoTalk platform, currently used by 98 percent of smartphone users in Korea.

“We intend to strengthen the platform business to concentrate more on the sector we can excel at,” CEO Jimmy Lim said.

Kakao has been running an Uber-like cab hailing service called Kakao Taxi as well as Kakao Driver, which connects customers with designated drivers, but they have only undermined profit and caused conflict with existing businesses.

Lim said the planned launch of Kakao Home Clean, an app to connect households with cleaners, has been suspended, and the company is looking for an external partner for a similar service. A beta test for Kakao Parking, which helps users find empty parking spaces, is under way, but the company has yet to decide on when to kick-start the service.

By overhauling its current business model, Kakao plans to capitalize on commissions in return for letting other businesses use its platform.

The upbeat earnings results and announcement of a renewed on-demand services blueprint pushed Kakao shares up 11.78 percent to close at 79,700 won on Thursday.