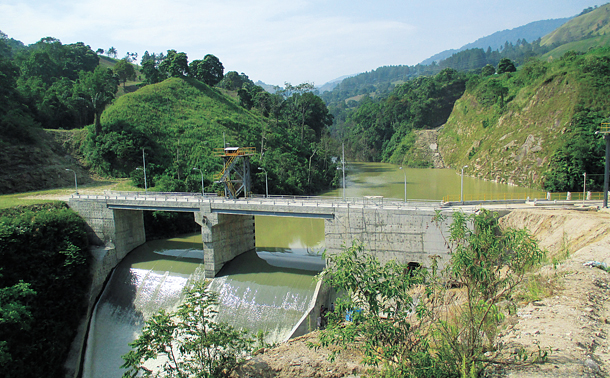 On Nov. 3, Korea Midland Power (Komipo) held a ceremony to celebrate completion of the Wampu Hydroelectric Power Plant in the Karo region of North Sumatra in Indonesia. Komipo is the first Korean power company to establish an overseas hydroelectric power business.

The Wampu Hydroelectric Power Plant was jointly developed by Posco Engineering and PT. Mega Power Mandiri in 2009 through an international consortium in response to rising electricity demand in Indonesia.

After construction of power transmission facilities began in July 2012, the project faced unexpected difficulties from the continuous volcanic eruption of Mount Sinabung in North Sumatra. A new transmission path was created to bypass the area, and thanks to the efforts, construction was finally completed on April 30 this year.

As the largest shareholder of the Wampu Hydroelectric Power Plant with 46 percent stake, Komipo has been playing a leading role by managing the construction and performing maintenance. The Export-Import Bank of Korea provided $1.31 million in financing, and Posco Engineering took charge of the design and construction of the power plant, making the business a successful example of Korean companies’ joint overseas expansion.

Komipo invested approximately $20 million in the Wampu Hydroelectric Power Plant and expects investment returns of about $90 million for the next 30 years.

The United Nations has acknowledged the plant’s ability to reduce greenhouse gas emissions by 240,000 tons a year, which will allow the plant to generate carbon credit that is expected to bring in additional revenue.

Thanks to the construction of the Wampu Hydroelectric Power Plant in Indonesia and other existing coal-fired electric power plants in Cirebon and Tanjung Jati, Komipo is currently generating annual profit of 20 billion won ($17 million) from its management power plants producing 2,025 megawatts of electricity in total.