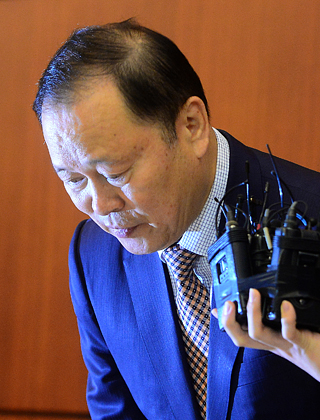 Park Seung-joo, 64, former vice minister of gender equality and family who last week was nominated as the new minister of public safety and security, announced Wednesday night during a press conference in Jongno District, central Seoul, that he will not take on the new role in the cabinet.

The statement was made one week after President Park Geun-hye nominated Kim Byong-joon as her new prime minister and accepted his recommendation to name the former vice minister as her new head of the Ministry of Public Safety and Security.

President Park backpedalled on her decision to nominate Kim on Tuesday morning and asked the National Assembly to recommend a new candidate through a bipartisan consensus.

Park Seung-joo, vice minister of gender equality during the former Roh Moo-hyun administration (2003-08), was mired in controversy over the past week when it was revealed he took part in a shamanistic event earlier this year in downtown Seoul.

In his 2013 book, the title of which translates as “Love is Caring for Others,” Park claimed to have visited his “past life” 47 times, raising suspicion that the president was trying to appoint another shaman-like figure.

Choi Soon-sil, a longtime friend of the president who is alleged to be the power behind the throne, is the daughter of Choi Tae-min, the late founder and leader of the cult Yeongsegyo, literally “Spiritual Life,” which combines tenets of Buddhism, Christianity and Korean shamanism. Some claim President Park was brainwashed and controlled by Choi Tae-min.

“I’ve always been deeply interested in security, and was willing to devote myself to policy development in the Ministry of Public Safety and Security because I had been communicating with the civil society through volunteer work,” said the former nominee on Wednesday.

Park, who currently works as board director of the Korea Society of Civil Volunteer, a nonprofit organization, said he would return to his main job and focus on promoting character education for Korean teenagers.

“I wouldn’t have attended the event if I thought of it as a religious or shamanistic occasion,” said Park, adding that he was trying to calm social jitters surrounding North Korea’s nuclear provocations and Japan’s natural disasters through a “ritual for the heavenly gods.”

The ritual, known as cheonje, was in honor of the ancient sky god, Cheonsin. Park is also accused of plagiarizing his doctorate dissertation.