Bracing for Trump at helm

Bracing for Trump at helm 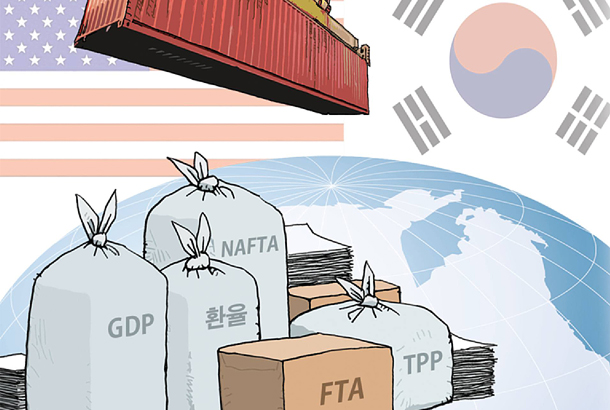 The news of Donald Trump winning the U.S. presidency brought up the nightmare of nearly two decades ago. We lived in agony watching the country dangerously teetering on the brink of bankruptcy. The frustration, fear, and anger all gushed back with the arrival of a Trump-led U.S. period.

There are several reasons Trump’s victory slams us into shock. First, the financial markets are upset. Foreign exchange and stocks have taken a beating. Trade and exports could be hurt. Lastly, there is the concern for the lasting negative effect through landscape change in global trade order from anti-globalization and protectionist policies from the world’s largest economy.

What could disrupt the financial market most is the currency issue. Trump throughout his campaign pledged to brand China as a currency manipulator. He declared he would bring Beijing authorities to the negotiating table after stigmatizing the country. He also accused Japan of similar activity. China, Japan and Korea are all on the U.S. Treasury watch list, along with Germany, Taiwan, and Switzerland. China and Japan reap a surplus of more than $20 billion in trade with the United States. Their current-account surplus exceeds 3 percent of their respective gross domestic product.

If China is classified as a manipulator, the shock would land on the Korean won. The currency market would turn volatile in fear of Chinas’ retaliation and trade war. Worse, Korea too could become labeled. Some experts have warned of the possibility. The won is set to be swept up in a downward spiral. If the timing coincides with the U.S. interest rate tightening cycle, we could be in a currency and liquidity crisis even bigger than 1997.

We also must brace for possible renegotiation on the bilateral free trade agreement with the U.S. Trump called the deal a “broken promise” that has damaged the U.S. economy. He is more critical of the multilateral platforms such as the Trans-Pacific Partnership and North America Free Trade Agreement, but he nevertheless warned that the Korea-U.S. FTA should be renegotiated. This is bad news for the external front. According to the Korea Economic Research Institute, a renegotiation on the Korea-U.S. FTA would cost exports $26.9 billion over five years. Korea’s exports, which have been shriveling for three years, would be hard hit. Shipments to elsewhere also would be damaged.

Trump has not hidden his hostility toward China. He claimed China has been “raping” the U.S. in trade and treating it like a “piggy bank.”

He blames China for taking more than 10 million American jobs. The target is China, but if China is shunned by the U.S. market, Korea would inevitably share the damage. The slowdown in global trade because of protectionist barriers would also mean reduced demand and opportunities for Korean exporters.

The International Monetary Fund estimates trade protectionism could shave the growth rate in the global economy by 2 percentage points.

Worse, the global economic order would undergo a makeover. Free trade would recede and give rise to anti-globalization norm. Trump believes free trade and globalization has killed the U.S. economy. The ex-real estate mogul has built his campaign and rise to the presidency with the support of rural and small-town white working-class people.

The fury from being isolated from the fruits of prosperity was the deep and stronger-than-expected power behind Trump’s victory. Given the depth of their anger, globalization would be stalled unless the inequalities are eased to some extent. The ramifications would be big for Korea as it has benefited largely from the wave of trade liberalization and globalization.

So what now? There is a lot to be done to survive in the new age. Korea must try to prevent foreign funds exiting fast as when they wreaked havoc on the economy two decades ago. Korea must take pain so that others outside do not misunderstand the Korean economy and policy. Seoul must mobilize all its connections to keep up dialogue with outgoing and incoming officials in Washington. It needs to prevent a disaster like being branded as a currency manipulator. It would have to build its reasoning on various perspectives.

It should highlight that Korea incurred a deficit of more than $10 billion in services trade. It would have to argue that labeling Korea as a currency manipulator could further weaken the won. All possible resources need to chip in. But during such a critical time, the government has become dysfunctional.

The legislature must step in to restore order and commander to battle with the challenges on the external trade and economic front. It must help send a clear message that the Korean policymaking and economy remains intact despite political turmoil. It must not let political interests affect the economy. It should first name a deputy prime minister in charge of the economy. It also should consider appointing a trade envoy on U.S. who would serve as a point man to persuade Washington. Japanese Prime Minister Shinzo Abe moved fast to contact Trump after the election. While the summit of Japan works hard for Japan, we don’t even have a commander on the field to tend the economy.


*The author, former editorial writer of the JoongAng Ilbo, is an adviser at the Korea Institute of Finance.