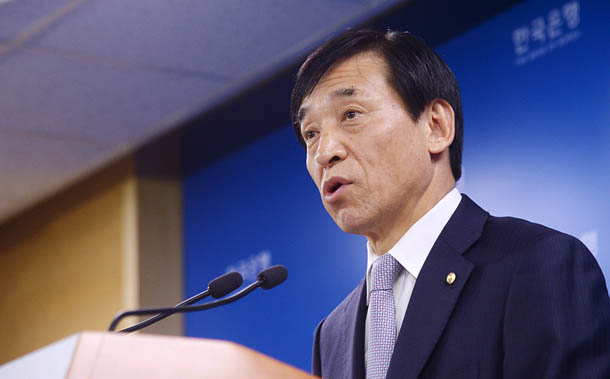 Bank of Korea Gov. Lee Ju-yeol at a news conference at the central bank’s headquarters in central Seoul on Friday announcing the holding of the key interest rate. [NEWSIS]

The Bank of Korea took a moderate stance by freezing the key interest rate for the fifth consecutive month on Friday amid worsening public sentiment over the Choi Soon-sil scandal and the election of Donald J. Trump as the next U.S. president.

As unexpected insecurities have emerged, the BOK hinted at the possibility of lowering its projections on the economic outlook for both this year and next year although it stressed that it is now focused on monitoring the situation.

“Internally and externally, unexpected insecure factors emerged, and as a result, the uncertainty of our economic growth path has heightened,” said BOK Gov. Lee Ju-yeol. “If the anxiety caused by these uncertainties is prolonged for an extensive period, economic sentiment will be dampened and the volatility in our financial market will grow, which will have a negative influence on to overall growth.

“However, at this point it is difficult to measure these risks including the political situation. But at present at least compared to last month the uncertainties that could have a negative influence on our economy undoubtedly have grown.”

The governor said it was for these reasons that the central bank decided to hold the benchmark borrowing rate at 1.25 percent. The last time the monetary policy committee made changes was in June, when it cut the rate from 1.5 percent as a pre-emptive measure against potential risks caused by restructuring in the shipping and shipbuilding industries. 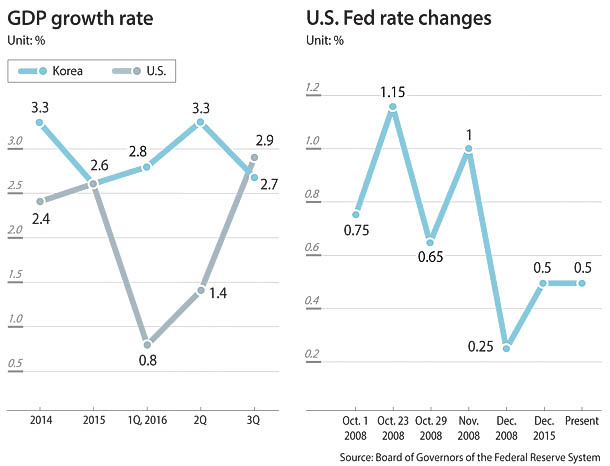 The BOK lowered next year’s economic outlook from 2.9 percent to 2.8 percent last month, but there are growing fears that not even this mark will be reached.

Many insiders expect that Trump’s election will undoubtedly bring down Korea’s economy, as he said earlier he would renegotiate the bilateral trade deal between the two countries, while imposing higher tax rates on major exporters such as China.

The governor, however, said it is not all pessimistic about Trump’s upcoming presidency and that there can be some positive sides to it.

“We don’t know for sure that Trump’s plans will actually turn into the government policies and I think the impact coming from such changes might be different by how strong and when the policies will be announced,” Lee said. “I have mentioned some negative sides to Trump becoming the president, but I also think there are some positive sides to it. He said he plans to execute financial stimulus packages through expanding government expenditure and focus on developing infrastructure, and this will be the positive thing for the Korean economy.”

Governor Lee, on the growing possibility of a U.S. interest hike next month, was confident that the normalization will not accelerate at an alarming rate as many in the market are fearing under Trump.

“The [U.S.] interest rate policy doesn’t change 180 degrees just because there were some changes in politics, and I think they will raise it about two times in 2017 as they said they plan to,” Lee said.

When asked if the BOK will raise Korea’s own borrowing rate if the U.S. Fed’s does so, the governor said monetary policy doesn’t necessarily work that way and that Korea still has room on its monetary policies.

An LG Economic Research Institute researcher argued that the BOK now has weaker power or room to lower the rate right now, as uncertainties have grown over the election and the possible interest hike in the United States. “The BOK is having a hard time deciding to lower the rate as the country faces a household debt problem on top of uncertainties from abroad,” said Lee Chang-sun, a senior researcher at LG.

Some experts saw rising household debt as one of the key factors holding back the central bank from lowering the key interest rate in hopes of boosting the economy.

“The growth rate of household debt is becoming one of the big factors when it comes to changing interest rates for the BOK,” said Cho Yong-goo, a researcher at Shinyoung Securities.

“The preliminary data for the third quarter of this year shows that our economy is moving toward meeting 2.8 percent growth,” Choi Sang-mok, vice minister of strategy and finance, said at a press briefing Thursday. Choi added that the decrement in exports has improved and consumption has risen, but he didn’t comment on the government’s outlook for next year.

“Both local and global financial markets are stabilizing faster than it was expected,” Choi said. “However, we will monitor closely the aftermath of the election, as uncertainties will continue to remain for a period of time.”