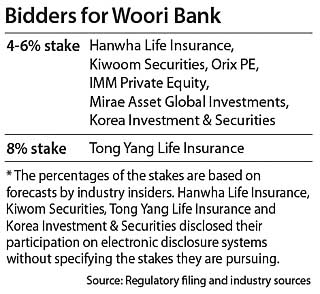 Will the fifth time be a charm in finally selling off the government’s Woori shares and privatizing the bank?

The stake sale of Woori Bank attracted more bidders than previously anticipated, as eight financial companies confirmed their interest in buying the government shares. But more interestingly, they asked for a larger amount of shares than the 30 percent available, which are worth up to 3 trillion won ($2.7 billion).

The Financial Services Commission said that the final participants would like a combined 33.677 percent after the bidding process. The regulatory agency said that the winners will be announced on Sunday. While the regulator refrained from revealing specific suitors, several bidders made it official. Hanwha Life Insurance, Kiwoom Securities, Tong Yang Life Insurance and Korea Investment & Securities disclosed their intentions electronically while not specifying how much they are pursuing.

Tong Yang, in particular, received attention since the move indicates its owner, Anbang Group in China, looks to further its presence in Korea’s finance circle. They submitted letters of intent to acquire stakes of 4 to 8 percent in the 30-percent stake held by state-run Korea Deposit Insurance Corporation. Other bidders reportedly include a slew of private equity houses such as IMM Private Equity and Japan’s Orix PE. A source at the FSC who spoke on the condition of anonymity said that most bidders pursued around a 4 percent stake. The number of final bidders represents a downturn from the initial bidding, in which a total of 18 companies showed interest.

Private equity players, including Vogo Fund, dropped out of the race.

The FSC said that the regulator will factor in bidding prices first along with other “non-price” aspects, though it did not detail what the non-price aspects are. The focus is whether the government can recover the massive amount of bailout money that went into Woori Financial Group. During the Asian Financial crisis of the late 1990s, the government injected 12.8 trillion won into Woori Financial Holdings, although it has recouped 64.9 percent of it, or around 8.2 trillion won, through sales of subsidiaries and minor stakes.

Still, based on the current price of Woori, chances are slim that it will retrieve the full bailout money. Woori Bank closed at 12,750 won, up 250 won compared to the previous trading day. To fully retrieve the amount, the price should be around 12,980 won.

The insurers are interested in so-called bancassurance, a strategy in which an insurance company uses a bank’s sales channel to sell insurance products. Investors who buy the proposed 4-8 percent stakes will be entitled to recommend outside directors and even the chief of Woori Bank.

After selling the 30 percent stake, the government still has a 20 percent share in Woori Bank.