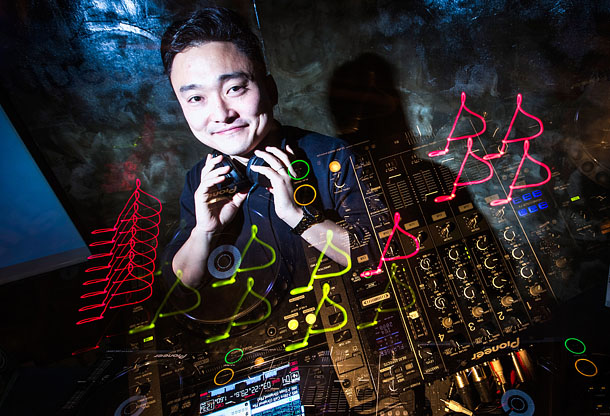 Jang Kyu-il, who heads a DJ community and is an amateur DJ himself, explains that “DJing is a form of art that mixes different types of music.” [PARK JONG-KEUN]

Jang Kyu-il, a salesman by day, is a DJ by night at a club in Itaewon-dong, central Seoul, which has become a favored destination for many club-hoppers. Jang appears at the DJ booth in a formal suit, as he comes right after work. “DJing is a form of art that mixes different types of music,” said Jang as he finished his performance, “The excitement of the audience depends on a DJ’s skills.”

Jang introduces himself as “DJ Point01” on stage and heads a DJing community named DJing After Work. “The community serves to give opportunities to amateur DJs who work during the day,” said Jang. “Those who came by today are mostly office workers in their 30s to 40s.”

Jang says he was “stressed from work and looking for an outlet” in 2012, when he decided to register with a DJing academy. Fascinated by the new hobby, Jang quit his job to work at the academy, although he returned to his company shortly after. But Jang said he was able to start the community with the encouragement of fellow amateur DJs he met at the time.

“A programmer,” he said, “who was stressed from always working late and taking care of his child after work, said he began to look forward to something for the first time. I wanted more people to experience the same thing he did.”

Jang started a web page last year and recruited members of DJing After Work via social media. As Jang convinced a professional DJ to join the group and provide feedback on members’ mixsets, or sequences of musical tracks mixed together to appear as one continuous track, many amateur DJs were eager to join the community, and the number of members quickly jumped to 1,800.

In order to respond to the demands of the community, Jang gives a monthly lecture on DJing and holds a meeting once or twice a week. “Most clubs on the weekdays aren’t as busy, so I convince club owners to give opportunities to amateur DJs,” Jang said. He recently published a book, “DJing, Starting from Today,” as part of his effort to help amateur DJs.

Jang claims that the idea of DJing being a difficult hobby “is far from the truth,” adding that “DJing is similar to writing. Just like you would take an excerpt of good writing, you do the same thing for the types of music you like and eventually combine them. People in their 30s to 40s more easily learn DJing than their younger counterparts because they usually have more experience with music.”

As a result, Jang has come to learn that DJing isn’t the young person’s game it’s often portrayed as being.

“I remember a company’s board member who threw a DJing show at his company after only one year of practice,” he said. “A member told me his dream is to continue DJing until he’s in his 70s. I will never forget that. My dream is to help members like him so that they don’t have to experience the same process of trial and error I did.”