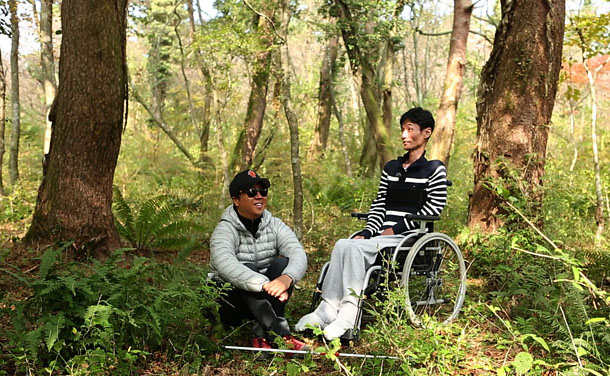 The movie “See-Saw” features Lee Dong-woo, who is blind, and Lim Jae-shin, who suffers from progressive muscular dystrophy, on their journey to Jeju Island. The movie was released Thursday. [DAEMYUNG CULTURETAINMENT]

“I have mixed feelings,” said Lim Jae-shin, a day before the premiere of the movie “See-Saw.” Lim has suffered from progressive muscular dystrophy for more than 20 years and his body can no longer move. But this has not stopped Lim from living his life to the fullest. “See-Saw” features Lim and his friend, Lee Dong-woo, on their trip - by wheelchair and by foot - to Jeju Island. Lee is a blind comedian and a singer.

The relationship between the two dates back to 2010 when Lim contacted Lee to donate his retina. “I watched Lee, visually impaired at the time, on television as he played with his children. It brought back memories with my daughter,” recounted Lim. “I called Lee because I thought giving up 5 percent of myself, all that is left of me, can give 100 percent to Lee.”

Although Lee rejected the offer, saying his eyesight cannot be recovered with implants, the two became friends. Ko Hee-young, a former documentary director, suggested filming the movie when she heard about the story. The two made a trip to Jeju Island in 2014 and it took two years to produce the film, which features Lim and Lee exploring every corner of Jeju, from a silver grass field to a forest trail.

When asked about the most memorable moment, Lim referred to his first experience of scuba diving. “It wasn’t easy to put on a diving suit over my paralyzed body,” he said. “After thinking about what to do for a while, everyone covered my body with plastic wrap and dressed me in the diving suit. I entered the water seated on a wheelchair, and when I actually got to see everything under the sea, I didn’t want to come out. I used the last bit of oxygen I brought with me to stay longer.”

Lim described the movie as “the journey of two ordinary fathers who are in their 40s.” Lim co-headed Hanbit, a local community for the disabled, for four years and considers himself an activist for disabled people. He said the trip to Jeju was not easy, as the road was too bumpy and often unpaved, making it a challenge for him to get there by wheelchair.

Lim added, “Theaters nowadays have seats for disabled individuals at the very front, but I still can’t watch movies because I don’t have control over my neck. Our generation is so quick to say how much progress we have made, and it’s hard to convince them we need to fight for more.”

When asked what he would like to do if he could move again, he replied, “I want to touch my daughter’s face and stroke her hair instead of telling her how beautiful she is. I hope this is the last time a story like ours becomes a movie that views us as special in some way.”