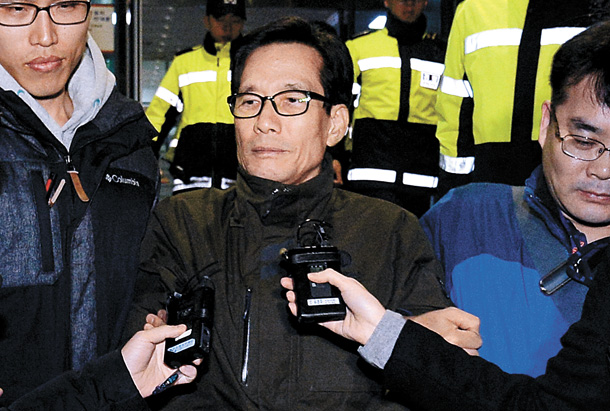 The developer of a lavish residential complex being built on the sea in Busan’s Haeundae District was arrested Thursday night on allegations that he created slush funds worth tens of billions of won and used them to lobby influential politicians including incumbent lawmakers, government officials and figures in the legal profession.

Lee Young-bok, CEO of Cheongan Construction Company, is accused of running a slush fund of at least 50 billion won ($42.9 million). He is alleged to have ties to Choi Soon-sil, the friend of President Park Geun-hye at the center of a snowballing abuse of power and influence-peddling scandal. Cheongan Construction Company is developing a 2.74 trillion-won high- rise apartment complex near Haeundae Beach, the Miami Beach of Korea.

Apprehended by prosecutors on Thursday night, Lee was brought to the Busan District Prosecutors’ Office around 3:20 a.m. Friday.

“I will do my best to answer all questions from prosecutors,” Lee told reporters.

Asked if he knew presidential friend Choi, Lee hesitated a second before frowning and shaking his head.

Lee is alleged to have been part of Choi’s network.

The longtime friend of President Park Geun-hye is accused of meddling in top state affairs, gaining access to secret materials, influencing personnel appointments, and strong-arming conglomerates to fund foundations allegedly linked to her and Park.

On Thursday, Lee was allegedly traveling from Seoul to Busan, intending to turn himself in to authorities at the request of his family, acquaintances and his lawyer, according to prosecutors. Lee changed his mind and was turning back to Seoul when one of his acquaintances reported him to police, prosecutors said.

He was apprehended while sitting in his car in Gangnam District, southern Seoul.

Lee was initially summoned by prosecutors in early August on charges of running a slush fund of 50 billion won or more at his company. In August, prosecutors arrested the company’s financial director and in September indicted a CEO of a design company involved in the construction of the residential complex who was charged with embezzling 12.5 billion won.

“Prosecutors will first investigate the tens of billions of won that Lee allegedly embezzled, and find out how he was able to be on the run for months, before deciding on whether to request a detention warrant for him,” said a prosecutor in charge of the probe. “We may discover more slush funds that Lee ran during our investigation.”

As to Lee’s connection to Choi, the prosecutor said, “It is not confirmed right now.” He added that “Lee will have to speak up” if he is found to have lobbied politicians and other public officials.

High-level officials, including incumbent lawmakers, judges and prosecutors are alleged to have been lobbied by Lee, and his arrest is being dubbed by media as “Busan-gate.”

The residential complex at the center of the probe is called LCT. It is being built on a 65,000 square-meter (16 acre) area some 10 meters from the coast in Jung 1-dong of Haeundae District. LCT will have a 101-floor (411.6 meters high) landmark tower that is also a hotel, two 85-floor apartment towers, a water park, shops and other commercial facilities. Posco is leading the construction, which is expected to be completed by 2019.

The complex gained media attention when a 320 square-meter apartment was pre-sold last month for 6.76 billion won, the record price for Busan.

Permission for the complex would have been against city regulations, given that it was to be higher than 60 meters, the limit for structure near the coast. But then, the city government changed its regulations.

Busan’s city government had originally planned a tourism complex for the site in 2007. But after Lee’s Cheongan Construction was selected to spearhead the project, the city government scrapped its height limits, approved the residential tower project in 2010, and the Haeundae District Office gave the green light for construction in 2011.

The city government spent tens of billions of won to widen roads near LCT and create a park, raising suspicions that bribes may have been paid.

“There have been no special favors granted to LCT,” said a city government official.

Critics also questioned the timing of Lee’s arrest. He may be hoping his case will be overshadowed by the Choi scandal.

“Prosecutors finally moved when I questioned them at the National Assembly last month on why they have failed to catch Lee for three months,” said Park Jie-won, acting chairman of the People’s Party.