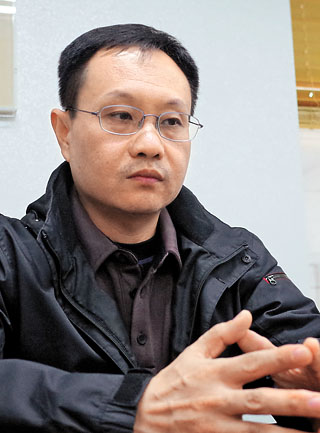 Woo Byung-woo, a former presidential aide recently fired from the Blue House over a series of corruption and abuse of power charges, apparently manipulated a criminal investigation in 2014 concerning the leak of a controversial internal Blue House report, a primary suspect of the case told the JoongAng Ilbo on Thursday.

In November 2014, Segye Ilbo reported that Chung Yoon-hoi, former aide to President Park Geun-hye, led a group of 10 confidants and held regular meetings to discuss state affairs and how their influence should be used. Chung is also the ex-husband of Choi Soon-sil, Park’s longtime friend, who is currently being investigated on charges of using her ties to the president to coerce conglomerates into making donations to nonprofit foundations and embezzling the money. Prosecutors concluded in December 2014 that the internal report about the behind-the-scenes influence wielded by Chung was leaked through the police. It held responsible two officers at the intelligence bureau of the Seoul Metropolitan Police Agency, Choi Gyeong-rak and Han, but Choi committed suicide after questioning. He had said the Blue House coerced Han into making a false confession.

Han told the JoongAng Ilbo on Thursday that Woo’s office approached him and coerced him. “They said I could avoid an indictment if I cooperated and said that I gave the document to Choi Gyeong-rak,” he said, adding that a staffer from Woo’s office contacted him on Dec. 8, 2014. “The staffer knew the contents of my cell phone, confiscated by the prosecution on the previous day. I told Choi Gyeong-rak about the situation.”

Han made the testimony and Choi Gyeong-rak was investigated and killed himself five days later. Choi Gyeong-rak wrote in his suicide note that he would have made the same choice as Han if he was approached by the civil affairs secretary’s office.

“My cell phone contained some information that Choi Soon-sil was controlling the president’s personal life and that Choi Soon-sil was also abusing her power over the Korea Equestrian Federation,” Han said. But he said the prosecution did not ask any questions about that information during the questioning. “Now that I think of it,” he said, “it was a mistake to go after the Korea Equestrian Federation scandal.”

If the prosecution and Woo’s office at the Blue House were aware of the information concerning Choi Soon-sil and the Korea Equestrian Federation and ignored it, they could face charges of dereliction of duty. The aide to Woo, whom Han claims contacted him in 2014, denied the accusation. Han said he decided to come clean two years later because he was too scared at the time. “I was a rank-and-file public servant and I was scared to fight the Blue House and the prosecution,” he said. “I am doing it now because I’m so sorry to Choi Gyeong-rak. If I keep silent, his suicide note will become a lie.”