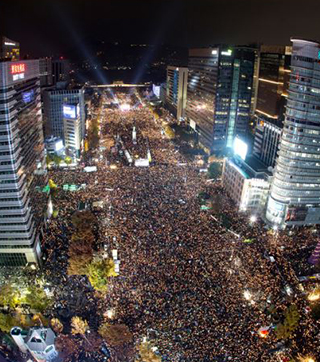 The biggest street protest in nearly three decades was held in the heart of Seoul with up to 1 million people calling for President Park Geun-hye to resign over an influence-peddling and abuse of power scandal involving her close friend.

As in previous candlelight vigils held on the past two Saturdays, people from all walks of life poured into the streets holding candles and banners that read “Park must resign!”

Saturday’s rally was Korea’s biggest since June 26, 1987, when an estimated 1.4 million people protested nationwide against the authoritarian Chun Doo Hwan regime and to demand democracy.

That massive rally helped force the Chun government to agree to direct presidential elections. Korea has been an electoral democracy since.

The protestors were calling for the president to resign for giving unprecedented power to one of her friends, Choi Soon-sil, in state affairs even though she had no official position or expertise.

Many among the protesters said it was their first time out in the streets protesting.

“I came out for the first time in my life out of my frustration with President Park,” said Jung Seong-hee, 58.

“I never expected to see a president who blatantly violated Constitution as Park did. I want her out of office immediately. She does not deserve the power she now exercises.”

People took to a stage to express their opposition to Park remaining in power. One young man who introduced himself a high school student asked, “Who gave power to President Park, who in turn gave it to Choi Soon-sil?” The crowd cried, “We did!”

Protests were still underway as of 11:30 p.m. with protestors facing a police line near Gyeongbokgung Station, which is only about 800 meters from the Blue House.

A number of political heavyweights joined the protest including former Minjoo Party Chairman Moon Jae-in and Seoul Mayor Park Won-soon, both of whom are expected to run for president next year. Leaders of all opposition parties as well as some ruling Saenuri lawmakers were seen at the protest.

“President Park must answer to the people out on the streets today. If she does not, an orderly exit for her will be impossible and state affairs will head toward collapse,” said Moon, who competed against Park in the 2012 presidential campaign.

The police dispatched 25,000 officers to the rally. No major clash was reported as of press time.

The Saturday protest was the third of its kind since the Choi scandal erupted to upend the political situation.

The rally is expected to run past midnight into Sunday.