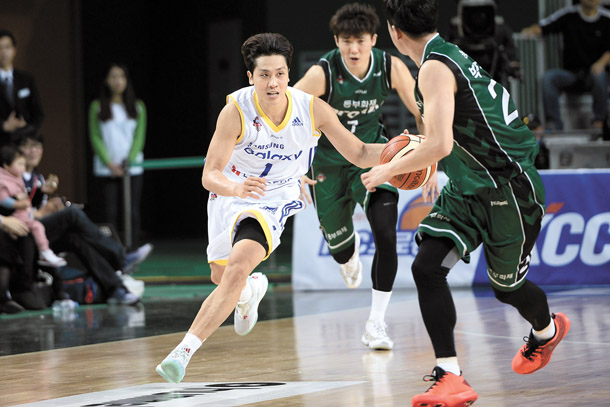 Seoul Samsung Thunders’ guard Kim Tae-sul, left, goes on a fastbreak during a KBL match against Wonju Dongbu Promy on Sunday. Since his transfer to the Thunders, Kim has been enjoying the second wind of his career, looking to add one more championship ring to his shelf with the team this year. [KBL]

Just two seasons ago, the Seoul Samsung Thunders were at the bottom of the Korean Basketball League (KBL) rankings. Now, they are at the top of the league, ranked at second just after the Goyang Orion Orions, the defending champs, with seven wins and two losses. Speculation rose as to what enabled the Thunders to undergo such a drastic about-face, but those familiar with the team credit Kim Tae-sul, a guard newly joining the Thunders this year.

During a KBL game on Sunday between the Thunders and Wonju Dongbu Promy, Kim was spotted hustling on the court, stealing the ball for a fastbreak in one minute and draining a shot from the midrange a few minutes later. From the game, the 32-year-old guard looked as fresh and mobile as if he was in his 20s, a sight that was missing in the past couple of seasons. Although the Thunders lost the game 88-81, Kim’s presence on the court was prominent, as he was picked as the player of the game while scoring 13 points, dishing out five assists and grabbing five steals.

The Thunders are one of the hottest clubs in the KBL at the moment, going on a five-game winning streak before the loss yesterday, accumulating seven wins since the opening of the season. They even took down the defending champions earlier this month 107-104 in a neck-and-neck match that went all the way to the second period of overtime. The only loss for the Thunders other than Sunday came on Oct. 29 to the Busan KT Sonicboom, who bested them by three points (90-93, final score). Some, including Lee Sang-min, the head coach of the team, call it the “Kim Tae-sul effect.”

Kim, a point guard who transferred from the Egis to the Thunders prior to the season, was once considered a super rookie when he joined the KBL in 2007. Before making his debut with the Seoul SK Knights, he had no match in college in his position when he played for Yonsei University. First year in the pro, he won the Rookie of the Year award and during his first two seasons in the KBL, he averaged 10.67 and 9.79 points each while dishing out 7.3 and 6.5 assists per game for the Knights.

He was an early bloomer, with his career peaking in the 2011-12 season, his third season in the pros, when he led the Anyang KGC to capture their first championship titles. His two-year absence from 2009 to 2010 to serve in the military seemed to have little impact in his game as he averaged 10.75 points during the regular season and 12 points during the championship series.

Of course, when Kim moved from the KGC after a solid three-year stint to the Egis in 2014, he was touted as a player who would end the team’s drought. A regular season title has eluded the Egis since 2000, as has the championship title since 2011.

But along with his transfer came his downfall.

During his first season with the Egis, Kim only averaged 6.25 per game and 3.7 assists, the worst numbers he’s put up since his debut. Kim eventually ended up in the D-League, the developmental league of the KBL, where he scored 14 points while playing in one game. Things did not pull through even in the 2015-16 season. Although the Egis finally won the regular season title, it was his worst season, in which he averaged a meager 4.52 points. In the championship series, where they lost to the Orions, he spent most of his time on the bench and averaged .60 points, a stark contrast to four seasons ago when he played in the series while donning the KGC uniform. “They said I can’t fall any lower,” recollected Kim.

Meanwhile, Lee, the head coach of the Thunders and former legendary point guard, kept his eyes on Kim.

Skeptics said Kim had passed his prime but Lee brought on Kim, giving him the starting position as well as responsibility to lead the team as a point guard and as a veteran. The strategy of the Thunders was re-organized with Kim at the center.

Given this lifeline, Kim grabbed on and eventually delivered. Preparing himself during the offseason, he played at the level of his early days. His wide vision and sharp passes had come back, as well as his ball handling skill and agility.

Right now, the point guard is averaging 11.2 points and 5.9 assists per game, enjoying the second wind of his career. “I can honestly say that I trained harder than anyone else,” said Kim. “I played this game for 20 years and there was no way I would forget how to do it well. Coach Lee knew where I was and trusted me. I tried to reciprocate his trust with performance and I’m glad to have done it so far.”

Now looking to take the top once more with the Thunders, Kim says his team’s success takes precedent over his personal glory. “I have to do what I have to do,” Kim said.