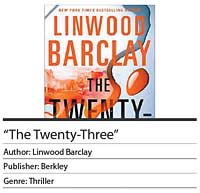 Linwood Barclay ends his trilogy set in Promise Falls, New York, with “The Twenty-Three,” a slam-bang conclusion that will surprise even hard-core thriller readers with the revelations and high body count.

The stage was set with his two previous novels, “Broken Promise” and “Far From True.” This one reveals that the three books are one giant novel with elements that make each one stand apart. The best way to enjoy Barclay’s gift for storytelling is to start at the beginning and binge-read, like a page-turning version of Netflix.

In “The Twenty-Three,” a killer has been causing havoc in the small town with seemingly unrelated crimes, except that each crime has a link involving the number 23. He has prepared his most diabolical plan for May 23, and it involves contaminating the city’s water supply. The entire population is at risk, and soon the bodies begin to pile up.

The murder of a college student is foremost on the mind of Detective Barry Duckworth, who sees similarities with two other unsolved homicides. He has to use every skill set imaginable to stop a killer from murdering the entire population of Promise Falls. And since it’s a small town, it’s clear the culprit is someone he knows.

Barclay knows how to create realistic characters that feel like people who could be next-door neighbors. Readers who are new to the series should start at the beginning, but those who have read the previous two novels will be pleased to know that the payoff has been worth the wait.