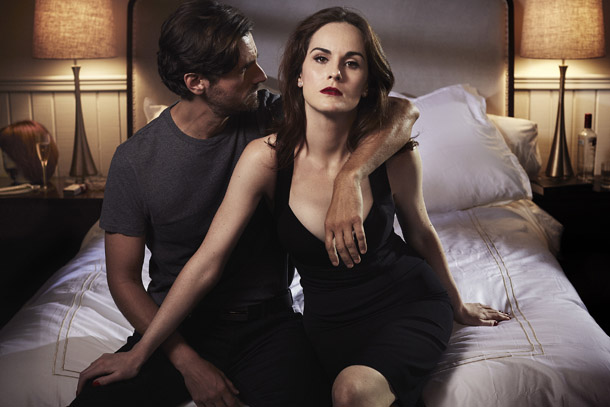 This new TNT drama series stars Michelle Dockery as a con artist and petty thief who, after gaining early release from prison (for good behavior, ironically) resumes her life of chaos and flimflammery on the outside. In Letty Raines’ future are newly brazen scams, more drug and alcohol abuse, and a desperate campaign to win back custody of her 10-year-old son (raised by her mother, who has lodged a restraining order against her).

And all this, before Letty’s life becomes ensnared with Javier Pereira, a charismatic hit man who conscripts her to assist him in his contract-killing business. Played by sexy co-star Juan Diego Botto, Javier could signal Letty’s ultimate downfall, or, instead, he with his no-nonsense style could maybe save her from her grifter, junkie ways.

“He kind of rescues her but he also holds her captive.” Dockery laughs. “It’s just so messed up!”

Premiering Tuesday at 9 p.m. EST (with its first hour available now for streaming ), the series is as sly at drawing viewers into this combustible arrangement as Javier and Letty are in targeting the victims he’s been hired to kill.

In her portrayal of Letty, Dockery instantly abrogates any ties to the role for which she now is best known: the proper, prissy Lady Mary Crawley of the British costume drama “Downton Abbey.”

And as Letty, whose scams call for endless accents and disguises, Dockery demonstrates she is an actress of rare versatility.

“Acting within the acting, the roles within the role, is really fun,” she says. “And we have fun with wigs. There’s a lot of wigs on this show!”

Interviewed at a Beverly Hills, California, hotel, Dockery as herself is wispy and fetching in a pastel sundress - quite a contrast to the wounded survivor in a series she describes as “poetic noir. This isn’t a procedural. Each episode (there will be 10 this season) is like a film in itself.

“It’s liberating,” she adds, “that I’ve been able to break free from Lady Mary and do something different.”

But that wasn’t the point in signing up for “Good Behavior.”

“I never think it’s a good idea to do something different just because you want to impress people that you can do it,” she says. “And I would never disrespect Mary and ‘Downton Abbey’ in that sense. I loved playing her. Then this role came out of nowhere. It was the perfect move.”