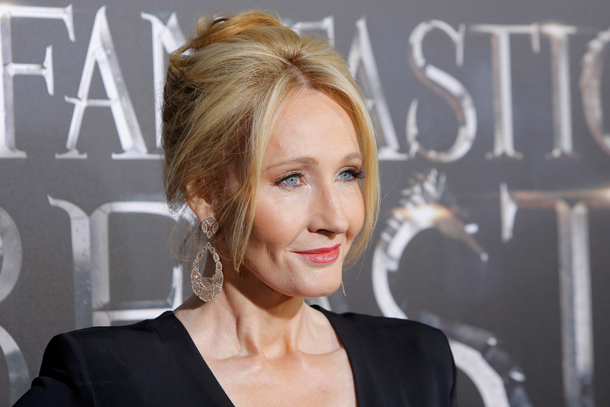 NEW YORK - J.K. Rowling came to town for a movie and a cause.

The British author was onstage at Carnegie Hall on Saturday night to introduce an advance screening of “Fantastic Beasts and Where to Find Them,” a Nov. 18 release that she adapted from her “Harry Potter” spinoff book of the same name.

The screening was a fundraiser for Lumos, a nonprofit foundation Rowling started a decade ago to help institutionalized children worldwide be reunited with their families.

Her voice hoarse from days of promoting “Fantastic Beasts,” Rowling joked that she was “full of honey” as she joined the film’s star, Eddie Redmayne, for a conversation about her charitable work and the movie’s script.

She has related often her inspiration for Lumos: She was reading the Sunday Times and spotted, to her horror, a picture of a child in a cage. Unsure if she could bear to keep reading, Rowling told herself that if the story was as awful as the picture suggested, she had no choice but to do something about it.

“They are so voiceless,” she said of the children in orphanages, which she has criticized often as damaging to children and their development. Wearing dark-rimmed glasses, her blonde hair pulled back in a ponytail, Rowling came prepared with notes and statistics about the plight of institutionalized children but also about the real possibility of helping them all.

“This is an extremely solvable issue,” she said. “It doesn’t mean it’s easy, but we know how to do it.”

Lumos CEO Georgette Mulheir, who spoke to The Associated Press shortly before Rowling took the stage, said that the author’s passion and financial support for Lumos had made it an unusually effective and stable organization. She noted that most foundations struggle year to year to raise money. But Rowling locked in revenues for Lumos by donating proceeds from another Potter spinoff, “The Tales of Beetle the Bard.”

“It means our programming can be long-term,” she said. “If you want to make major changes happen in a country, you have to make immediate long-term investments.”

Rowling also spoke of “Fantastic Beasts” and the writing process. The film was directed by David Yates and also features Alison Sudol, Dan Fogler, Katherine Waterston and Ezra Miller, all of whom briefly came onstage after Rowling and Redmayne.

Countless novelists have struggled to write for films, calling the two art forms almost entirely different. Rowling managed in part by treating the script like a book, including not just dialogue but long descriptive passages about the setting and characters.

“It’s like learning a completely new language,” she said of her script. “I learned to write a screenplay while writing a screenplay.”