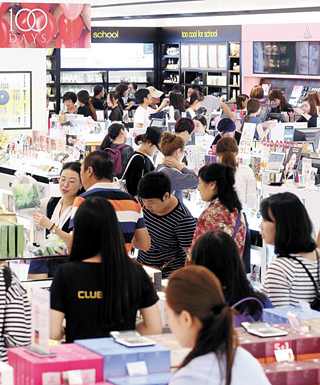 After reports that the Chinese government issued orders to travel agencies last month to reduce the number of tour groups coming to Korea - supposedly out of political retaliation for deployment of a missile defense system - Korean retailers are tweaking their marketing strategy to focus more on individual travelers, many of whom are in their 20s and 30s.

Tourists visiting Korea by themselves are on the rise. Last year, the percentage of solo travelers accounted for 57.8 percent of all Chinese visitors, according to a survey conducted by the Korea Tourism Organization.

“Even before the orders from the Chinese government, the uplift in individual tourists has been ongoing for some time now,” a Korea Tourism Organization spokesman said. “The recent increase was prompted by the inflow of younger generations born in the 1980s and ’90s, who are capable of gathering information online and making reservations on their own without going through travel agencies.”

Ctrip, a Chinese provider of travel services, reported in July that the number of individual tourists rapidly grew in the last two years to make up 50 percent of all overseas tourists from China this year. Younger travelers born in the ’80s and ’90s accounted for 45 percent of all tourists.

This age group, born under China’s one-child policy, is often nicknamed the generation of “little emperors.” As only children, they enjoy boundless financial support from their family, including money for traveling abroad, an experience that many parents consider an investment to help expand their child’s knowledge outside the country’s borders.

Another Chinese tourism agency, Qunar Cayman Islands, has found that the number of university students going abroad without their families is sharply increasing, rising 4.7 percentage points this year to 19.2 percent of all travelers. The China Youth Daily, a newspaper targeting students, said eight out of 10 university students preferred to go on graduation trips without their parents.

Individual tourists already account for half all Chinese shoppers at Lotte and Shilla Duty Free, the industry’s top two operators. As the younger generation accounts for a larger proportion of solo shoppers from China, they have become the focus of many marketing activities at duty-free shops.

Industry leader Lotte Duty Free said this year’s percentage of individual shoppers from China was 48 percent, a rise from 44 percent in 2014 and 45 percent in 2015.

The company’s strategy to attract customers is a VIP membership for which over 600,000 Chinese customers are registered. The service includes direct pick-ups from the airport and personal shopping assistants who offer advice on purchasing items.

“The base of our popularity among Chinese shoppers is Lotte’s brand awareness and reliability,” a company spokesman said. Lotte is the oldest duty-free operator in Korea, having opened its first store in 1980.

To maintain their brand image among the younger generation, the company is investing in online marketing channels frequently used by those in their 20s and 30s. Its page on Weibo, the Chinese version of Twitter, has the second-largest number of followers among foreign brands registered on the site.

At Shilla Duty Free, Chinese customers in their 20s and 30s have shown a big increase in the last few years. As of September, 76.5 percent of sales this year have come from that age group. In 2010, that figure was just 37.8 percent.

The company manages a pool of power bloggers who upload posts on Chinese social media channels about the brand and discounts. Shilla Duty Free also organizes events at its stores, such as photo booths or beauty classes, based on the idea that younger shoppers seek hands-on experiences rather than just buying and leaving.

Other department store brands, relatively young compared to Lotte and Shilla, saw a lower percentage of individual shoppers. Shinsegae Duty Free, which first opened in May, said their proportion was about 20 percent.

Its immediate plan is to expand brand awareness among duty-free shoppers by developing new local brands that cater to young Chinese women who show high interest in Korean products and the Korean lifestyle.

One area that Shinsegae Duty Free is focusing on is products designed with characters from the popular messaging apps Line and Kakao. The K-Character Zone inside Shinsegae Duty Free’s Myeong-dong branch is posting a growth rate of 210 percent per month.

“The focus point when it comes to targeting younger Chinese customers is that they are most attracted to ‘fun’ and ‘storytelling,’ even when it comes to shopping,” a Shinsegae spokesman said. “So for now, our goal is to put those factors in terms of brand development and product display.”