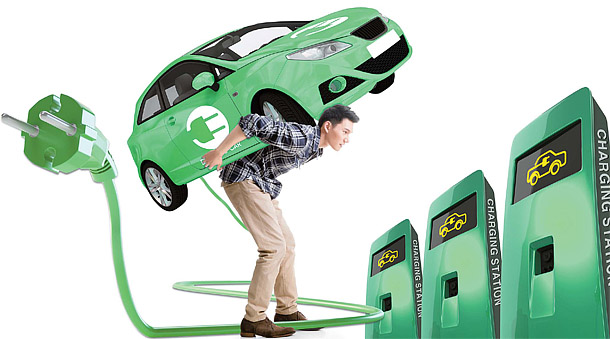 Kang Jin-kyu, a 29-year-old resident of Namyangju in Gyeonggi Province, got a severe case of sticker shock earlier this year when he was shopping for an electric vehicle (EV).

A dealer gave him a quote that was 7 million won ($6,000) higher than what a friend had paid for the same vehicle a month earlier.

“I didn’t know there would be such a big difference in the incentive offered by the government. I wasn’t aware that it is based on where you live,” said Kang.

“So ultimately, I gave up on the electric car. I was interested because I heard it was cheap and I thought I could get a big discount from the government and then save even more on maintenance fees. But I was mistaken.”

Like Kang, many people are confused about the complicated subsidy system of both the central and local governments.

Kang’s friend in Goyang didn’t have to pay one. In Namyangju, the fee was 2 million won.

Depending on where you live, the amount of the subsidy can differ by as much as 8 million won.

“I think I made the right decision not to buy the electric car,” Kang concludes. “I mean, think of all the unexpected hassles that I could have confronted with for this not-quite-ready-for-prime-time car?”

Eco-friendly cars are a hot segment in the global auto market.

EVs first started getting attention in the early 2000s. From sales of only 1,670 units globally in 2005, that number grew to more than 700,000 units in 2015 according to data released by the International Energy Agency.

Industry analysts forecast that number could easily exceed 4 million by 2020. By the year 2040, half the vehicles on the road globally could be electric, Bloomberg has predicted.

But progress is slow in Korea due to retrogressive and inconsistent policies by the government.

The government started various tax incentives and subsidies in 2010, but a total of only 8,071 fully electric vehicles have been sold as of September. 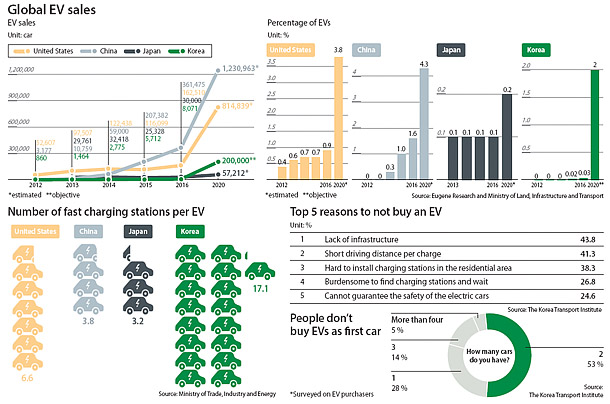 Each ministry oversees one part of the initiatives, although they tend to overlap.

The Ministry of Industry is in charge of investing in research and development of electric vehicles and other equipment such as batteries and charging stations.

The Ministry of Environment provided incentives worth 15 million won last year, but lowered it to 12 million won earlier this year. In July, it again raised the incentives to 14 million won.

People who bought EVs when the incentives were lower are asking the ministry to give them the missed part of the subsidy. But the Ministry of Strategy and Finance, which has to make that decision, hasn’t done so yet.

The confusion goes on

There are extra subsidies provided to EV buyers from local governments, and they differ widely.

For example, the cities of Yongin and Goyang in Gyeonggi Province provide 5 million-won subsidies. However, many other local areas such as Pyeongtaek and Namyangju provide none.

Even though Yongin and Goyang give subsidies, they have limits on how many they can give each year.

While Goyang gives a subsidy to 15 EV buyers per year, Yongin restricts it to two. Some areas pick subsidy recipients by order of arrival, while others pick them randomly.

There is no way to compare incentives comprehensively. A buyer has to check the policy of each local government.

“The absence of a central command center for policy is a serious issue in Korea’s EV market,” said Kim Pil-soo, head of the Korea Electric Vehicle Association.

“Sporadic policies announced by each department are confusing the public, which already has doubts about buying EVs,” he said.

China, the world’s second largest EV market, is determined to catch up with the United States, largely to tackle its air pollution problem. Its central government plays a major role in trying to grow the EV market.

Since 2000, expanding the EV market has become a national project. Beijing is considering making it mandatory for local car makers to sell or manufacture a certain percentage of electric cars by 2018. Similar systems are currently enforced in California and a few other states in the U.S.

In October, Korea’s Ministry of Environment belatedly announced that it would implement the same system by 2018, requiring domestic carmakers to sell a certain number of EVs.

However, industry insiders say such a regulation is unreasonable considering the current infrastructure.

“Selling more green cars is what we want also,” said one industry insider, “but the consumers don’t want them yet because of the lack of infrastructure. If the government requires us to sell certain number of EVs when the public is not ready, it will be impossible to meet the demand.”

There are a little more than 80,000 electric vehicles registered in Korea, according to the Ministry of Land, Infrastructure and Transport. The number of fast-charging stations nationwide falls short of 500 units, meaning that there are some 17 EVs for each charging station. In the U.S. that number is 6.6 and in China it’s 3.8. In Japan, there are 3.2 EVs for every charging stations.

The Ministry of Environment recently announced it will expand the number of fast-charging stations to 1,900 by the first half of next year. Ordinary charging stations, which take an average of more than five hours to fully charge, will be increased from the current 9,200 to 19,500.

However, Korean residential districts are mostly apartment complexes, and it’s hard to build a consensus of owners of apartments in big buildings or complexes to install charging stations.

“We install our own charging station for our EV buyers,” said one insider from imported carmaker.

“It’s easier to install them in stand-alone houses like in Western countries. It’s harder to do with apartment complexes where you have to receive consent from the residents. People who don’t drive EVs feel reluctant to have these things inside their complexes because they think it wastes electricity or emits something harmful.”

Will EVs replace or at least exceed the number of internal-combustion cars?

Korea’s registered EVs account for less than 0.1 percent of vehicles running on roads. In the U.S., the world’s largest EV market, barely 1 percent of all cars are eco-friendly.

“People will never abandon LPG or diesel cars because there is no inconvenience related to them,” said Lee Hang-gu, a senior researcher at Korea Institute for Industrial Economic & Trade.

If internal-combustion vehicles are entirely replaced by electric cars, oil companies and government departments that benefit from oil taxes will lose out. They will oppose a full implementation of EVs.

“The year 2023 is expected to be the oil-demand peak year,” said Lee. “It is important the EV makers position themselves for after that when oil demand starts to gradually fall.”

To expand the EV pie, experts say, the vehicles have to be marketed as something more than a means of transportation.

“Tesla Motors initiated the global EV phenomenon,” said the Korea Electric Vehicle Association’s Kim. “People want to buy EVs because of a high-tech feeling, as if they are riding in a rolling computer. Transportation is not the main reason people are interested in EVs.”

According to survey of 140 EV buyers in Korea by the Korea Transport Institute, a majority said their EV was their second car. While the basic transportation needs are fulfilled by the first car, they expect something extra from the EV.

Currently, the longest range among EVs available in Korea is on Hyundai Motor’s Ioniq. It can run 200 kilometers (124 miles) on a charge.

Chevrolet’s Bolt EV, which will be launched in the first half of next year, will be able to run 383 kilometers on one charge.

Tesla Motors enters Korea early next year. It is expected to play a major role in sparking interest in EVs.

“With enhanced quality, EVs will have to dig into that niche market currently being enjoyed by highly tech-savvy drivers,” said Lee. “However, if the current system continues and Korea fails to get its act together on EVs, the entire segment could go down the drain after 2023.”