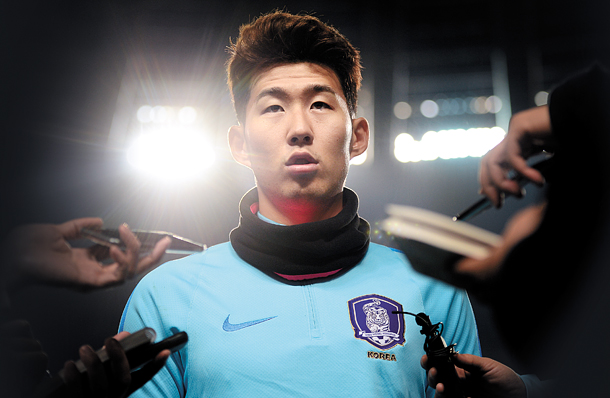 The time has come for Korea to go head-to-head against Uzbekistan in a match crucial to gaining a ninth straight World Cup berth.

Just last Friday at Cheonan Baekseok Stadium in Cheonan, South Chungcheong, Korea defeated Canada 2-0, a decent tune-up round before today’s game against the Uzbekistanis. The question remains whether that 2-0 victory was enough of a morale-booster for Korean players to leave behind the poor form they showed last month.

Right now, Korea is third in Group A of the final round for the 2018 World Cup qualifiers, racking up two wins, one loss and one draw. The visiting Uzbekistan, ranked 48th according to the FIFA rankings, is second, posting three wins and one loss. Although Korea has five more matches to play in the round, a loss from tonight will make it difficult, if not improbable, for Korea to qualify for the upcoming World Cup in Russia. In the regional qualifiers for the 2018 World Cup, the winner and runner-up of a group will automatically gain berth, while the third-placed team will have to compete in a regional play-off round before competing for a spot in the World Cup with the team that places fourth in the Confederation of North, Central American and Caribbean Association Football qualifiers.

On an optimistic note, No. 44 Korea took down the 110th Canada without having to mobilize some of its key players: Ki Sung-yueng of Swansea City, Lee Chung-yong of Crystal Palace and Son Heung-min of Tottenham Hotspur. They reportedly sat out Friday’s match for tonight’s game. And according to Korea’s manager, Uli Stielike, the three are likely to be tactical center pieces in the game.

“Everything comes down to the match against Uzbekistan,” said Stielike. “In terms of open spaces during the match, it is going to be really tight, more so than against Canada. We have to rely on quick and accurate passes.”

And that’s where the trio from the English Premier League (EPL) come in. 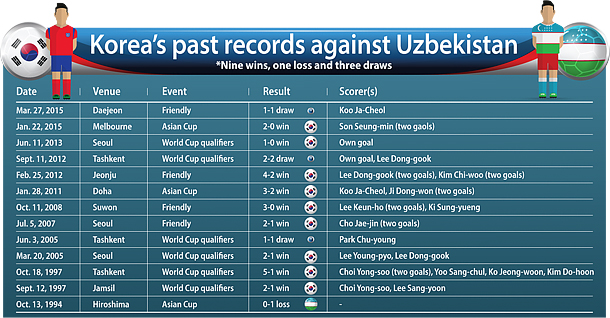 Korea’s offensive plays literally start with Ki, a central midfielder and the captain of the team. He controls the pace as well as ball possession as the play-maker, often feeding the ball for strikers up front to tap it in. At the other end of the pass sent by Ki is often Son, arguably the ace in Stielike’s squad.

Son, who plays for the EPL’s Spurs, was selected as the EPL player of the month for September after netting four goals and dishing out one assist. He was the first Asian player in the history of EPL to receive the honor, something even now-retired Park Ji-sung, who played for Manchester United from 2005 to 2012, failed to achieve. Although Son struggled in October as he kept silent while his team went seven games with a single win, he is certain the poor showing with his club will not affect his international duty.

The Son-Ki duo has already proved its capacity to collaborate to put something on the scoreboard. Their combined effort came through when Korea toppled the Qatari national team 3-2 last month. With the game tied at 2-2, Son received a through pass from Ki, connecting a non-stop shot to score.

As for Lee, who suffered an injury during training before the match against Canada and is on the mend, it is questionable whether he will appear in tonight’s game. But according to Stielike’s latest remark, Lee’s injury is a light one, which means there is a slight chance Lee will show up. Although some questioned Lee’s competitiveness after a prolonged slump,

However, Lee proved he still had some fire left in him during the first match of the qualifier against China, allowing the Korean side to double the lead with a header. Lee’s positioning was especially brilliant during the play, which opens another possibility for Ki up front.

Defensively, containing Server Djeparov, a midfielder, and Alexander Geynrikh, a striker, will be pivotal. Both Djeparov and Geynrikh have played in the K-League Classic before, which means they know the ins-and-outs of Korean style of football. Those familiar with the players say it is especially crucial to shut down Djeparov.

As for the Uzbekistan national team, tonight’s match against Korea isn’t one to take lightly. Completely outpaced in terms of past records against Korea, they have recorded no wins while playing on the road against Korea. And out of the seven games played in Korea, Uzbekistanis played in Seoul four times and posted not even a draw. Essentially, for Uzbekistan, Seoul is as much a nightmare as Tehran recently was for Korea.

With today’s match kicking off at 8 p.m. in Seoul World Cup Stadium, it looks like Uzbekistan has more than just head-to-head records against their favor.