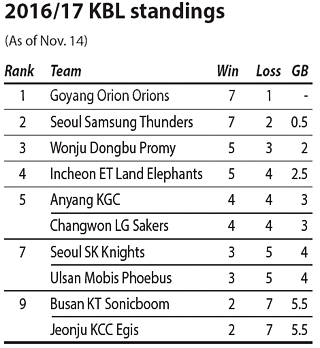 On Sunday during a Korean Basketball League (KBL) match between the Seoul Samsung Thunders and the Wonju Dongbu Promy, Lee Sang-min, the head coach of the Thunders, was at a loss for words. In a neck-and-neck match, Kim Joo-sung of the Promy, who in past seasons exploited his 2.05-meter (6-foot-8) frame and spent a majority of his time under the basket, drained three shots beyond the arc. The last three pointers by the center came at a crucial juncture when the Thunders were about to completely narrow the deficit. After Kim scored his last three-pointer of the day, the Thunders’ skipper, Lee, simply smiled to express his perplexity.

After the first round of the 2016-17 KBL season, Lee Jung-hyun of the Anyang KGC and Terrico White of the Seoul SK Knights are tied for first in terms of three-pointers, sinking a total of 29 in the first eight games of the season. After these two comes Ulsan Mobis Phoebus’ forward, Jeon Jun-beom, who scored 21 three pointers, averaging 2.63 per game.

Byun Ki-hoon, a guard from the Knights, is trailing behind Jeon by only two shots beyond the arc, draining 19 three pointers in the first round. It’s no surprise that these players are ranked at the top of the three-pointer category, since all of them are either forwards or guards, which are positions designated for the team’s shooters.

But out of the blue, Kim of the Promy, deemed one of the best homegrown centers in the league’s history, appears next in line, the only center to be ranked within the top-ten of the three-pointer category. So far, in the first eight games of the season, Kim has drained 16 threes, averaging 2 per each game.

While his presence under the basket will be missed, the Promy head coach, Kim Young-man, doesn’t really mind Kim stepping outside the arc. Not only does he bring along his defender, often a center from the opposing team, to make it easier for others to challenge the basket, but Kim still does his job as a center, averaging 6.6 rebounds so far.

The third-ranked Promy will take on the defending champs, the Goyang Orion Orions, at home tonight. 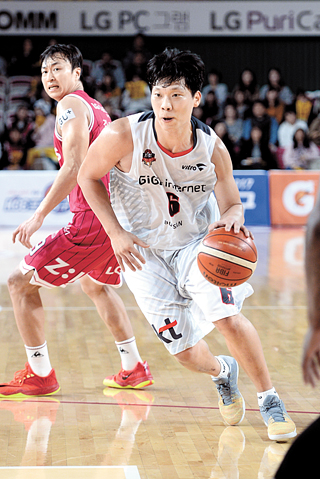 Do the bottom-ranked Busan KT Sonicboom have what it takes to regain their former glory this year?

Although the chances look slim, it may be possible for the Sonicboom to make it into the playoff round this year if players like Park Sang-oh continuously pull through.

The Sonicboom are currently tied at ninth in the league with two wins and seven losses. They went into a four-game skid last week, until Park’s outstanding showing on Sunday helped the team to cut the slide.

During the league game against the Seoul SK Knights, the Sonicboom claimed a 92-90 victory after an intense match that went into overtime. While the Sonicboom’s imports did their share, with Herbert Hill tallying a double-double by scoring 16 points and grabbing 10 rebounds and Larry Gordon scoring 20 points, it was the homegrown veteran Park who highlighted the game by putting 26 points, seven rebounds and one crucial blocked shot.

The Sonicboom weren’t off to a good start, trailing by 26 points by the second quarter. But Park made sure they didn’t end the first half on a bad note, draining a buzzer beater at the end of the second quarter to signal their return in the latter half.

In the third quarter, the Sonicboom narrowed the deficit to 13 points. Park then scored shots from midrange and outside the arc in the fourth, only to drain a three-pointer with 10 seconds remaining in the game to equalize the score, forcing the match into overtime.

Park extended his firepower during the overtime, netting a three to score the first shot for the team. The two teams tussled, going back and forth to take the lead. With the score tied at 90-90, Sonicboom’s Hill earned two free throws after he was fouled. The import capitalized on the chance and drained both, giving the Sonicboom the lead. Kim Sun-hyung of the Knights drove to the basket for a layup with few seconds remaining in the game, but was rejected by Park, who flew out of nowhere to block Kim’s attempt and secure the team a win.