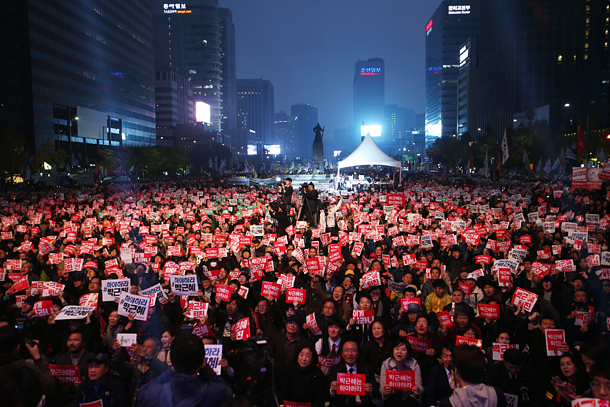 Demonstrators shout “Out with Park Geun-hye” at their second rally on Nov. 5. [PARK JONG-KEUN]

The biggest street protest in the last three decades pulled about one million people from around the country to the streets of downtown Seoul on Saturday. But it wasn’t only large. It was peaceful. There were no scenes of angry protestors armed with iron bats in tense confrontation with riot police backed by water cannon.

The congregation that lit up the streets of Gwanghwamun Sqaure with candles and mobile phone flashlights chanted “Out with President Park Geun-hye!” They believe she shamed the country by giving her longtime friend Choi Soon-sil unfettered access to administrative power. At the same time, they cried “No to Violence!” to ensure the assembly remained orderly and peaceful and stayed true to its main purpose: peaceful protest.

When some people pushed beyond the police line, others pulled them back reminding them that provoking the police was not their intention. The crowd was not the usual group clad in militant red T-shirts but families with children and young couples and friends. They took pictures of the extraordinary scene and enjoyed the rare feeling of countrymen united in their anxiety and love for their troubled land. The weekly rallies will continue until the protestors’ goal is met.

President Park Geun-hye’s leadership is beyond repair. She has utterly lost legitimacy and any kind of confidence from her people. Her aides have betrayed her by releasing taped recordings of confidential conversations. They are laying all the blame on her. She has become a public laughing stock having been revealed as some kind of empty vessel in the thrall of a cult leader. Even the die-hard conservative population has given up on her. She is a fool if she thinks her title can save her. In fact, that title is all she has left.

There are three possibilities going forward. The president can voluntarily step down. Since she doesn’t seem to want to willingly surrender her elected power, some kind of force may be inevitable. Korea’s first and fourth presidents Syngman Rhee and Choi Kyu-ha stepped down. Their resignations, however, brought about chaos. If Park steps down, she would be leaving a dangerous precedent for her successors, who could end up following in her footsteps if their approval rating hit a single digit. In its history of 227 years, the United States had only one president who resigned during his term. Richard Nixon stepped down because he faced impeachment for the Watergate scandal. In a law-abiding country, a presidential resignation should be the last resort before an unavoidable impeachment.

The second possibility is impeachment, which is perfectly legal. But the procedure takes at least six months. Independent prosecutors would have to specifically prove criminal charges. An impeachment motion could be vetoed by the ruling Saenuri Party. It remains unclear whether the Constitutional Court would rule in favor of the impeachment.

Another problem is who would act as leader if the president is suspended from her job. Would it be Prime Minister Hwang Kyo-an or Kim Byung-joon, nominated by the president to become prime minister? Or will other parties agree to an entirely new candidate? Given there is still 15 months left in Park’s term, impeachment, too, does not seem like a good idea. It could only work in favor of Park by buying her more time in office.

The last option is the president stepping back and surrendering authority to a nonpartisan cabinet. The main opposition Minjoo Party has suggested that she could save her title if she promises to retreat to a back seat. The splinter People’s Party has also demanded Park’s “orderly” retreat from government after leaving the ruling party and allowing the legislature install a new cabinet chief. The faction of the ruling party critical of the president has joined that call for an “orderly” retreat. Except for the faction still loyal to the president, lawmakers are more or less in agreement. They want the president to renounce all power, give it to a nonpartisan cabinet, and become a figurehead.

Such a compromise could help provide a breakthrough in the political stalemate. The president has already become a failed leader, but does not have to turn herself into a tragic one. She should be given the decency to finish her term — after clearly relinquishing power.

There are many political factors at stake and complexities in separating the president’s role in domestic and foreign affairs. There’s also the military command to be considered. We are entering a path that is totally unfamiliar. There are no signposts to follow. The legal ambiguities should be addressed through political dexterity. The opposition has a responsible role. It must not revel in the power it has suddenly received in such extraordinary and grave circumstances.

Society desires not merely punishment for the corrupt, but a leap to entirely new community ground. People have been appalled by the extent of power a single woman and her relatives and associates could have over the country. Park must not keep her silence too long if she has any respect for the pain and anger she has caused the people. We sincerely hope the maturity the people have shown in their protest rallies touched her heart.