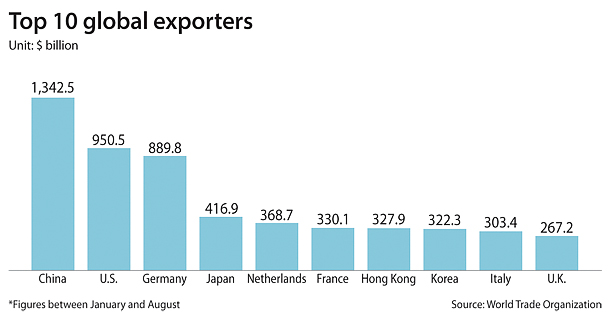 Korea’s rank as a global exporter fell two notches as the world’s trade shrank to the smallest level in six years.

Korea tumbled to 8th place from 6th the year before in rankings by the World Trade Organization (WTO).

The figures used for the rankings were exports for the first eight months of this year. Considering Samsung Electronics’ Galaxy Note7 debacle that began in October, along with a strike at Hyundai Motor that started in July, figures for the rest of the year will be weaker.

Next year could be even worse if the Donald J. Trump administration pushes protectionist trade policies. There are already signs of the Trans-Pacific Trade Partnership being abandoned.

According to the WTO, between January and August, Korea’s exports amounted to $322.3 billion, falling 8.8 percent from the previous year. The rate of decline in the first eight months of 2015 was slower at 6.4 percent.

Korea’s exports decline comes at a time when world exports fell to the lowest level in six years and other major exporters are struggling too.

As of August, the combined exports of 71 countries amounted to $19.4 trillion, a 4.6 percent drop from the $20.3 trillion posted during the same period last year. The last time such combined exports were that low was in the first eight months of 2010, when they reached $18.3 trillion.

This is the second consecutive year in which global exports retreated. Last year the drop was much sharper as they fell 11.9 percent from $23.4 trillion.

The last four months of the year will not be better.

After Samsung Electronics withdrew its Galaxy Note7 phablet, the country’s mobile phone exports nosedived 48 percent in July compared to the same period a year earlier. Other than the slight bounce back in August, Korea’s exports have been in a declining spiral since the beginning of last year.

Next year the situation could be worse.

A U.S. trade dispute with China is also expected to affect Korea’s GDP growth. The International Monetary Fund estimates that Korea - along with Malaysia and Thailand - will see its GDP fall 0.5 percentage points if the U.S. imposes a 45 percent tariff on Chinese imported goods, which Trump has promised.

Citibank estimated a similar decline of 0.6 percentage points for the Korean economy.

One of the main vulnerabilities are Korean components used in Chinese factories to make end-products.

Some experts said the U.S. economy could suffer as well, which would result in fewer Korean exports there.

“In the short-term [the U.S. economy] could expect some positive impact, including job creation through expansion of investments on infrastructure, lowering of corporate tax and limiting immigrants,” said Hong Joon-pyo, a researcher at Hyundai Research Institute.

“However, in the long run U.S. economic growth will slow down during Trump’s administration because of its trade protectionism and larger government spending resulting from its tax reduction policy and isolation.”

If Trump delivers on most of his promises, Moody’s projects the U.S. economy to grow an average 0.6 percent annually, which is lower than the 2.3 percent average growth expected if the current policy championed by the Barack Obama administration continues.

At a meeting held on Monday, Finance Minister Yoo Il-ho acknowledged the growing risks of a more protectionist U.S. He also stressed potential areas for economic cooperation, including the energy and infrastructure development that President-elect Trump promised during his election campaign.

“In the mid-to-long term, whether President-elect Trump will realize his campaign promises of abolishing TPP and tougher attitudes towards trade with China into policy will have a major influence on the global market,” the finance minister said.

“We will create a strategy, including forming a joint body made of government departments and the private sector in preparation for [the Trump administration’s] pressure on trade including a renegotiation of the Korea-U.S. free trade agreement, while analyzing the influences of each industry and create a communication channel [with the new U.S. government].”

Yoo said the government departments in charge of financial and foreign exchange markets have been running a 24-hour emergency team since the U.S. presidential election results.

“We will continue to maintain an aggressive stance until the uncertainties ease to a certain level,” Yoo said.