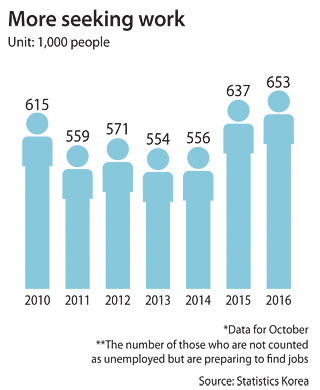 The number of potential job seekers in the economically inactive population reached its highest in 13 years in October, new government figures show.

According to Statistics Korea data released Monday, the number of those looking for jobs but not part of the economically active population rose by 16,000 year on year, or 2.5 percent, to 653,000 last month. This includes people who are attending public and private education institutions to find jobs as well as those who are staying at home and preparing to look for jobs.

The government argues they should not be considered unemployed since they are not part of the economically active population. Others argue, though, they should be treated as unemployed people because they are trying to find jobs at the moment but just haven’t submitted applications or entered the job market yet.

The growth of this population is astronomical compared to the past. In 2003, when the government started to compile the data in its current form, the number was only around 340,000. It surpassed the 600,000 level for the first time in 2010, and this year’s October figure was an all-time high.

“It appears that more people are staying in school longer, and more people are spending longer periods of time preparing for company or government entrance exams,” a Statistics Korea official said.

In October, the unemployment rate rose 0.3 percentage points year on year to hit 3.4 percent, the highest level for the month since 2005. The youth unemployment rate for those aged 15 to 29 was 8.5 percent last month, also hitting a high since 1999.

Many private think tanks have argued that the unemployment rate in Korea is higher than what the government says when counting those who are seeking jobs but are not counted as part of the economically active population. The government does not include people who are willing to get a job but have not applied to any companies.

Hyundai Research Institute argued in a report released earlier this year that the actual youth unemployment rate is near 34 percent if the government includes people preparing job applications and resumes.

However, the government has refuted the report, arguing that it is hard to say those people are unemployed at the moment because one cannot know for sure whether they are willing to work right away.