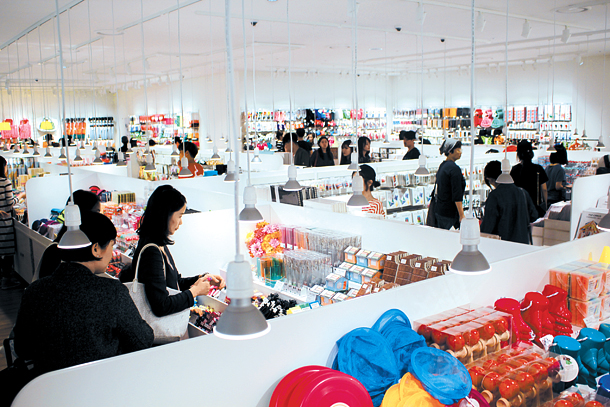 Danish lifestyle brand Flying Tiger Copenhagen’s shop in the Pangyo branch of Hyundai Department Store in Gyeonggi. Spotting a quickly growing market for home furnishings, the company entered Korea in August with its first shop at Lotte Young Plaza in central Seoul. It will add two more shops by the end of this year. [FLYING TIGER COPENHAGEN]

With the fashion industry in a prolonged slump in Korea, a number of major retailers and even apparel labels are betting on furniture to keep afloat.

The home furnishing market has seen steady growth in the past decade, nearly doubling from 7 trillion won ($6 billion) in 2008 to 12.5 trillion won in 2015, according to a Heungkuk Securities report. The market is expected to reach 18 trillion won by 2023.

“Consumers are paying more attention to home decor, with the number of single-person households who want to enhance their lifestyle without having to spend extravagant amounts of money increasing,” said Nam Seong-hyun, a Heungkuk Securities analyst.

Swedish furniture giant Ikea has caught on quickly to the trend, launching a new kitchenware lineup in September. At its sole Korea branch in Gwangmyeong, Gyeonggi, a 1,000-square-meter space has been dedicated to kitchenware. 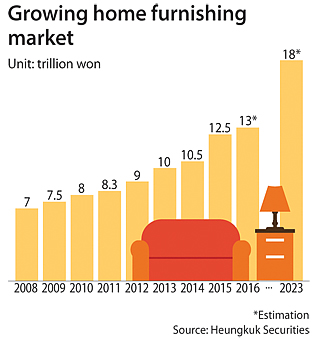 “We cannot provide any details as the deal is ongoing, but we are positively looking into it,” a Hyundai Department Store spokeswoman said.

Quirky Danish lifestyle brand Flying Tiger Copenhagen landed in Korea in August, opening its first store on the first floor of Lotte Young Plaza, which specializes in youth fashion, in central Seoul. Just a month later, the Danish retailer opened its second shop at the Pangyo branch of Hyundai Department Store in Gyeonggi. The brand’s Scandinavian-style kitchenware and home decor items have garnered a loyal fan base in Korea.

“Korea is our brand’s second Asian market [after Japan], and we are getting a very good response from consumers,” said Kwon Ji-hye, a spokesperson for Flying Tiger Copenhagen. “The rising number of single-person households as well as similarities in consumer trends between Koreans and Japanese have led us here.”

The Danish company will open two more stores by the end of the year, a rare feat, since many foreign brands have not expanded in Korea as quickly as Flying Tiger Copenhagen has.

Retail giant Shinsegae Department Store opened a showroom for high-end French furniture maker Roche Bobois earlier this year. The company is known for collaborating with famous designers like Jean Paul Gaultier and Kenzo, and Korea is its second Asian market after Hong Kong. “Lifestyle brands are one of the strongest segments in our branches, no doubt,” a Shinsegae spokesman said.

So strong, in fact, that even apparel labels are looking for a bite of the home furnishing market. French fashion brand Castelbajac announced it would launch a lifestyle line in Korea by next year targeting young newlyweds and single-person households. The line will include furniture and household products.