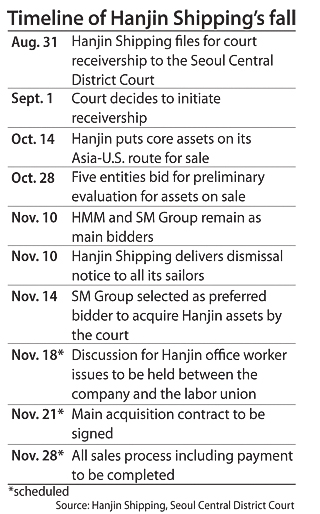 Bulk ship operator Korea Line Corporation has been selected to take over Hanjin Shipping’s core assets on its Asia-U.S. route, beating out its larger rival Hyundai Merchant Marine in a bid to acquire the last of Hanjin’s holdings, a local court said Monday.

Initially, Hyundai Merchant Marine was favored to win the bid since the government frequently mentioned the company as a possible buyer of Hanjin’s lucrative assets after the once-seventh-largest shipping line in the world filed for bankruptcy protection.

Even so, industry sources say Korea Line is in much better financial shape than Hyundai Merchant Marine, which is still going through its own belt-tightening management turnaround plan. As a new entrant in the container shipping industry, the winner of Hanjin’s Asia-U.S. route is expected to take on more employees.

“Our priority is on who can buy out the maximum workforce from Hanjin,” Hanjin Shipping’s labor union for office workers said in a statement Monday before the court’s announcement.

“We have no other option but to hope for Korea Line’s win as job security and financial stability can’t be guaranteed with Hyundai Merchant Marine,” the union’s leader, Chang Sung-hwan, said.

The main contract will be signed next Monday, and the asset sale is expected to be completed by Nov. 28.

The court’s initial sale list included five vessels, related crew members and networks on Hanjin’s Asia-U.S. route as well as seven of the company’s overseas subsidiaries. The list was later expanded to include Hanjin’s stake in the Long Beach Terminal in California, which handles over 30 percent of the U.S. West Coast’s trade volume.

The court said Korea Line had bid for assets on both the Asia-U.S. route and the terminal. Hanjin has a 54 percent stake in the terminal, and the rest is owned by the world’s second-largest shipping line, MSC. While the terminal could give the buyer an advantage in U.S. operations, the stake-holding relationship could get complicated as MSC has priority rights in purchasing Hanjin’s stake.

“We respect the decision of the court, but considering global shippers’ attempts to expand in size to win the ongoing price war, we feel concerned about the situation,” Hyundai Merchant Marine said in a statement.

“If another chance is granted, we will put our best efforts into acquiring assets and operating them. For the time being, we will focus on securing terminals at home and abroad.”

Hyundai Merchant Marine on Monday posted a 230.3 billion won ($196.3 million) third-quarter operating loss, with accumulated loss totaling 647.3 billion won this year. Despite the poor performance, the company has managed to pull down its debt-to-equity ratio from 2,007 percent last year to 186 percent.