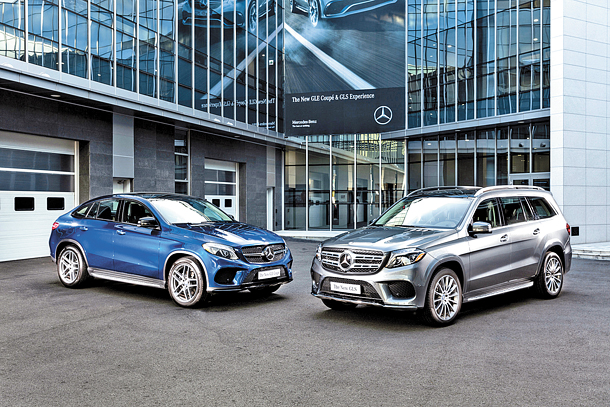 “Demand for Benz’s SUVs has grown over the years,” said Dimitris Psillakis, president and CEO of Mercedes-Benz Korea on Friday at a media event at a Mercedes-Benz training center in Yongin, Gyeonggi.

According to the company, accumulated SUV sales this year, as of October, rose by 170 percent year-on-year from 2,758 units to 7,454. SUV sales took up 16.6 percent of that total this year, nearly 10 percentage point more than last year, when SUVs accounted for 7.1 percent.

“Mercedes’ sales of SUVs in Korea were the highest among other German import brands,” Psillakis said. “We are going to continue the winning streak with six SUVs we have in the market, two of which will be introduced today - the junior style and the luxury one.” 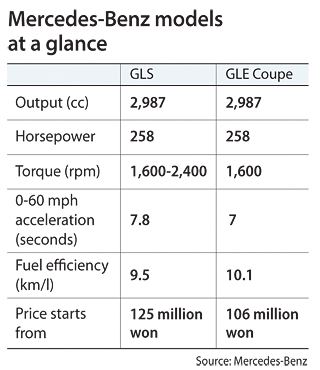 Psillakis showed particular confidence about completing Mercedes-Benz’ SUV lineups next year, when the seventh model - the GLC Coupe - will launch. The Korea JoongAng Daily took two new vehicles out for a test drive in Yongin, Gyeonggi, to a range that stretches 70 kilometers (43.5 niles) full of hilly and winding courses. The congested road and diminished visibility made it hard to be fully impressed by how the car performs at a high speed, but even so, GLS and GLE Coupe were overachievers in many ways.

First of all, the GLE Coupe, equipped with a 3.0-liter V6 diesel engine, is the German premium carmaker’s first SUV coupe model, and it provides a powerful yet smooth and athletic drive. The engine sound is so soft you’d almost think it was a gasoline vehicle.

Its strongest feature, its sportiness, was most noticeable in extremely curvy and hilly roads where the agile handle and relatively light bodywork made it easy to move the car around in the way the driver intends. However, the firm bodywork that is characteristic of an SUV is all there. The vehicle is equipped with a 3-layer roof frame and more rigid A and B pillars. The exterior design is topped with a low ceiling - 68 millimeters (2.7 inches) lower than the standard GLE SUV - giving it a more horizontal and smooth sideline in the rear, which emphasizes the vehicle’s sporty demeanor.

On the other hand, the new GLS model, which Mercedes likes to dub the S-class of their SUV models, is equipped with the same engine, is definitely the more imposing of the two.

Its presence is hardly negligible on the road, given its massive size - a body length of 5,130 millimeters and a height of 1,880 millimeters - which is able to hold seven people at once. Its rival, the BMW X5, is 4,886 millimeters long.

When the second and third rows of seats are completely folded down, the back trunk can load luggage up to 2,300 liters in size.

Its massive size, however, can come as a downside on curvy routes or where there are many cars, because the steering wheel doesn’t respond as well when compared to the Coupe vehicle. Handling the GLS required much more strength and skill, to be sure, especially in metropolitan areas. Both vehicles’ back seats are equipped with separate entertainment screens.