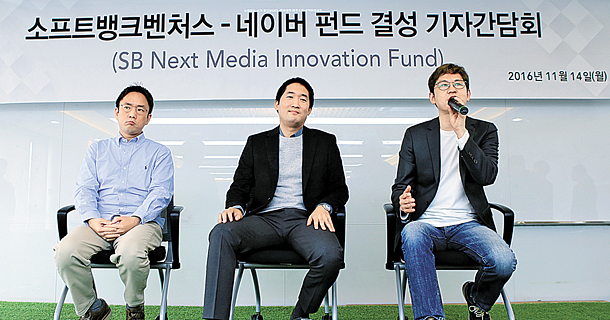 Beneficiaries of the fund will receive between 1 billion won and 1.5 billion won in investments.

The fund will be led by J.P. Lee, the director of SoftBank Ventures Korea. Kim Chang-wook, CEO of Snow, and Kim Jun-koo, head of Naver’s webtoon and web unit, will provide advice.

Snow, dubbed Asia’s Snapchat, is a photo- and video-editing app developer that was spun off from Naver in August as part of the portal’s efforts to internationalize. Naver successfully listed mobile chat app operator Line Corp. on the New York and Tokyo stock exchanges in July.

“Naver has huge name value domestically but its brand power isn’t that big outside of Korea,” said Kim Jun-koo in a joint press conference in southern Seoul on Monday. “That made it difficult for us to secure quality content in a competition against global players.”

Snow’s recent success prompted Naver to partner with the tech venture capital company launched in 2000 by the Korean unit of SoftBank, whose founder and CEO is the ethnically Korean-Japanese Masayoshi Son. The idea of the fund was hatched earlier this year, according to Kim Chang-wook. Just two months ago, Naver and Line announced they would spend 50 million euros on a French investment fund in a strategic move to lift their presence in the European market.

“In a media platform race, distinguished content and related technologies are growing ever crucial,” Kim Jun-koo, said, “which led me to think that a systematic and long-term preparation is necessary.”

“Mobile content consumption will grow much more from now,” said Kim Chang-wook. “We want to contribute to the success of content creators.”

He took the example of one start-up that is experimenting with changing users’ voices through deep-learning and artificial intelligence. The technology, when embedded with the Snow app, could bring the fun factor to the next level.

Snow, launched in September 2015, lets users add fun elements to their photos and videos and selfies with a collection of more than 100 animated stickers, emoticons and filters. Users - either individuals or groups - can swap their faces and change themselves into dogs or police officers with the help of the app’s facial motion recognition and masking technology.

“Facial masking was a long-existing technology but it became enormously popular after it met with the right kind of population and application - as seen in the case of Snow,” said the Snow CEO.

The app, which is much more popular overseas than at home, has had over 80 million downloads so far. It has been evolving like Snapchat by adding chat and live-streaming to appeal to tech- and photo-savvy millennials.