Planned meeting between Park, Minjoo leader is called off

Planned meeting between Park, Minjoo leader is called off 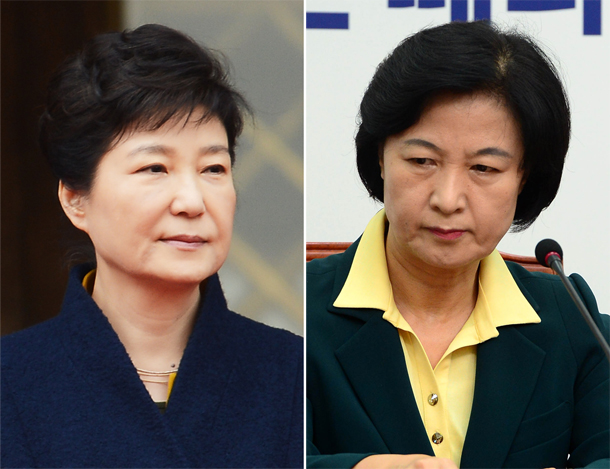 President Park Geun-hye agreed Monday to meet the leader of the main opposition party Tuesday to discuss a breakthrough in Korea’s unprecedented leadership crisis following the biggest public protest in nearly 30 years, as up to one million people gathered in Seoul to demand Park’s resignation.

But Minjoo Party of Korea Chairwoman Choo Mi-ae cancelled the meeting a few hours later. Members of the Minjoo objected to it and two other opposition parties were furious for having been sidelined.

The Blue House said Monday that Park accepted the proposal of Chairwoman Choo for a meeting. Earlier in the morning, Choo made the proposal public at the party’s leadership meeting.

The meeting was supposed to take place at 3 p.m. at the Blue House.

“I want to meet with Park and have a candid discussion with an open mind to find a resolution,” Choo said.

She sent the offer to the Blue House and Park accepted it.

The Blue House originally hoped for a meeting with the heads of the ruling and opposition parties, but decided to meet with Choo first.

Park’s presidency is endangered by a scandal over the influence in state affairs exerted by her lifetime friend Choi Soon-sil. Following revelations that Choi had far more influence than she should have, to the point of being a power behind the throne, public calls for Park’s resignation reached a new peak in a massive street demonstration Saturday.

It was Korea’s biggest rally since June 26, 1987, when an estimated 1.4 million people protested nationwide against the authoritarian Chun Doo Hwan regime, demanding democracy. It also surpassed the 2008 protest against the Lee Myung-bak administration’s decision to resume U.S. beef imports, participated in by about 700,000 people.

Choo was expected to advise Park to resign immediately, a step beyond the opposition party’s earlier stance that the president surrender all her power to a new prime minister and a new, nonpartisan cabinet.

“Choo will tell Park that her immediate resignation, at least, is unavoidable,” said a close aide to Choo.

The planned Park-Choo meeting created a rift in the opposition alliance against the president. The Minjoo Party, the People’s Party and the Justice Party have been cooperating in their attacks on Park.

Heads of the three parties met last Wednesday and agreed to participate in Saturday’s anti-Park protest. They also agreed to meet again after the rally to discuss the next course of action.

In her proposed meeting with Park, Choo acted alone without consulting her opposition counterparts.

“Choo, who proposed the meeting, and Park, who accepted it, both failed to understand the people’s desire,” said Rep. Park Jie-won, acting head of the People’s Party. “I wonder where Choo’s real intention started from, and I wonder if she actually understands what the public truly want.

“The Blue House gladly accepted the proposal because it wants to dilute the scandal and try to protect the presidency,” he said. “It is a strategy to divide the opposition and save the presidency. And we are being trapped by it. They were waiting for this, and Choo delivered it.”

“The people already issued an ultimatum to the president and are waiting for her answer,” Sim said. “I wonder if a meeting with the president has any use at this point. It will only create confusion.”

Sim said the people did not give the Minjoo Party the authority to settle the situation, questioning Choo’s capacity to represent the entire opposition parties. She said the public wants Park to step down in an orderly manner and if this demand is not accepted, the National Assembly must start the process of presidential impeachment.

The organizer of Saturday’s candlelight rally also held a press conference in front of the Minjoo Party’s headquarters and urged Choo to cancel the meeting with Park.

Although the opposition parties have demanded Park surrender her power to a new prime minister, the constitution does not have clauses governing such a situation.

If Park chooses to resign, the constitution stipulates that a successor must be elected within 60 days. Holding a presidential by-election has almost unlimited challenges. To name just one: an incumbent local government head who wants to run would have to resign from his or her post 30 days before the election. Many presidential hopefuls such as Seoul Mayor Park Won-soon would have to follow this rule.

The new president would start his or her term immediately after the election, without a transition period. In the meantime, the cabinet led by Prime Minister Hwang Kyo-ahn, formed by Park, would stay until the new president will create a new team.

Impeachment would give politicians more time to prepare for a presidential election. After the National Assembly passes a motion to impeach the president, Park’s power would immediately be suspended, while the prime minister would oversee state affairs as acting president.

The Constitutional Court would deliberate the legality of the impeachment, and that process takes up to six months.

While some are openly demanding Park’s impeachment, the political complexities are an obstacle. Rep. Jung Sung-ho of the Minjoo Party said impeachment requires clear evidence that the president violated the constitution and other laws. “Although we are enraged by the scandal, there is no evidence yet to prove Park’s charges,” he said.

Minjoo Rep. An Ho-young also said it is premature to push for impeachment without a fixed charge against the president.

Rep. Min Byung-doo of the Minjoo Party said if the prosecution’s indictment of Choi stipulates that she is an abettor of crimes allegedly committed by the president, the National Assembly is responsible to start the constitutional process of impeachment.

Impeachment also requires at least 29 votes from the ruling Saenuri Party. As of now, the three opposition parties and independents occupy 171 seats in the 300-member National Assembly, and passing a presidential impeachment motion requires 200.

Although about 50 Saenuri lawmakers are considered non-loyalists of Park, it remains to be seen if any of them will actually vote across the aisle.

Opposition parties also fear the political aftermath if the impeachment is voted down. “This could be a political pardon for Park,” said a Minjoo lawmaker.

After passing the legislature, an impeachment is reviewed by the Constitutional Court. Of the nine justices, six must support it, and the current panel is considered largely conservative. Six incumbent judges were recommended by former President Lee Myung-bak, President Park and the ruling Saenuri Party.

In 2004, the court struck down the impeachment of then-President Roh Moo-hyun.