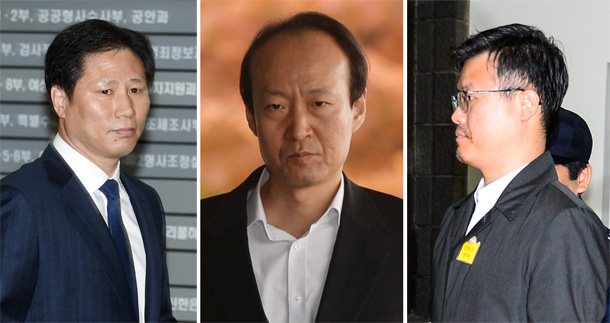 The so-called “three doorknobs” to President Park Geun-hye - Ahn Bong-geun, Lee Jae-man and Jeong Ho-seong (from left) - were called in for questioning by prosecutors on Monday. [NEWSIS]

This means that the president is not the subject of a criminal probe now - in which case she would be questioned as a suspect, not a witness - but could be in the future. Her responses in questioning this week can be used in a criminal proceeding in the future.

The questioning is likely to occur before Thursday at a yet-to-be-decided location.

Because a Korean president enjoys immunity from criminal prosecution, Park cannot be charged while in office except in cases of insurrection or treason.

But the president can be questioned either as a witness or a suspect. The prosecutors’ decision to notify her of her right to remain silent is seen as their viewing of Park as a suspect in the so-called Choi-gate scandal, which continues to mushroom.

“Prosecutors inform those whose status are not suspects during questioning of their right to remain silent if there is a possibility of them becoming suspects later in the investigation,” a prosecutor-turned-lawyer was quoted as saying by the JoongAng Ilbo.

Courts only accept the validity of evidence from testimony made during questioning if a person was informed of their Miranda rights.

The fact that prosecutors will inform Park of her Miranda rights is seen as indication that prosecutors believe Park was involved in a scheme by Choi Soon-sil to extort donations from conglomerates worth 77.4 billion won ($65.8 million) to two nonprofit foundations. A prosecutor involved in the case told reporters Park would attend the questioning as a witness and that prosecutors would not designate her as a suspect on an official interrogation document.

Park’s answers could be reflected in the indictment of Choi, which will be filed in court by Sunday. Choi has been undergoing questioning since Oct. 31 while being detained under a pretrial detention warrant.

Choi, whose relationship with Park dates back to the mid-1970s, is accused of various charges including meddling in state affairs, abuse of power in collusion with a senior presidential aide, acquiring classified information without security clearance and embezzlement of money from the two foundations.

When and where Park’s questioning will take place had not been decided yet as of press time Monday. But it is likely that it will take place by the close of Wednesday. It will be the first time ever for a sitting president to be questioned by prosecutors.

Jeong Ho-seong, the third doorknob, is being detained while undergoing questioning on his part in helping Choi pull strings from behind the scenes. Prosecutors also raided the home of Cho Won-dong, a former senior presidential secretary for economic affairs, who is accused of having pressured Lee Mie-kyung, the vice chairwoman of CJ Group, to step down from management at the Blue House’s behest.

Ruling and opposition parties agreed on Monday to an independent counsel to probe Choi-gate.

Under the agreement, the Minjoo Party and People’s Party will recommend two candidates for chief special prosecutor. Park will select one of the two candidates to lead the special investigation team.

The ruling Saenuri Party and the two major opposition parties agreed that the special counsel would look into all allegations stemming from the scandal, from leaks of classified information to Choi’s alleged strong-arming of conglomerates to make contributions to the two nonprofit foundations.

The special counsel will also investigate whether 53 companies that contributed to the foundations, Mi-R and K-Sports, expected business favors from the government.

If that turns out to have been the case, it will back a bribery charge for Choi as well as for President Park if the two colluded.

The Saenuri Party’s change of stance follows rising public disgust at the Park government, which shows no sign of easing as evidenced by the Saturday street rally in which a million people demanded Park’s resignation.

“The Saenuri Party has decided not to be involved in the recommendation process for a chief prosecutor,” said Saenuri Rep. Kim Do-eup.

The agreement calls for the selection of a chief prosecutor among lawyers who have 15 years or more experience as a judge or prosecutor. The special counsel will have 120 days to run the team.