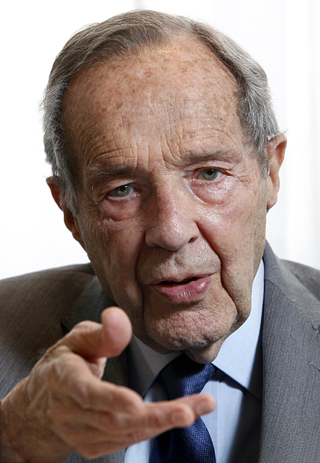 William Perry, former U.S. secretary of defense, said the Barack Obama and George W. Bush administrations’ handling of the North Korean nuclear issue failed and it is necessary to engage Pyongyang by understanding its goals.

In 1999, the former defense chief for Bill Clinton produced the so-called “Perry Process,” a proposal to freeze North Korea’s missile development while paving the way to the normalization of relations between Pyongyang and Washington, which ended with the George W. Bush administration.

The JoongAng Ilbo and Korea JoongAng Daily conducted an interview with the professor emeritus at Stanford University, who served as defense secretary from 1994 to 1997, at the Millennium Seoul Hilton in central Seoul on Monday.

Perry spoke about the election of Donald J. Trump as president and its impact on security issues, how to approach Pyongyang following the failure of previous administration’s policies, as well as the long-stalled six-party talks between the two Koreas, Japan, China, Russia and the United States. “I have a long-standing principle that a good diplomat’s greatest asset is not his mouth but his ears,” said Perry, recalling his negotiations with Pyongyang some 17 years ago. “You should listen to what they are trying to achieve.”

He continued, “We are not in the position today that I was in 1999, when I had opportunity to actually stop the nuclear weapons. That’s history, that’s gone, and we are not going to get back to that position again. That doesn’t mean we should give up negotiating, that just means we should have realistic goals.”

Perry highlighted that it is a matter of fact that North Korea possess nuclear arms. But he said that he does not believe North Korea will launch nuclear weapons, since it is “not suicidal,” but that its nuclear development may “embolden them to take other actions in other fields, provocative actions, which will stimulate some kind of military response from South Korea and the United States,” that could escalate - and ultimately lead to the use of nuclear weapons. Perry most recently published a memoir, “My Journey at the Nuclear Brink,” and gave a lecture later Monday at Yonsei University on the issue.

Q. How do you feel about the reality of a Trump presidency?

A. Well, I am disappointed at the outcome and even somewhat concerned with the outcome. But I believe that we have a very robust and vibrant democracy, and that we will make it work.

Do you think we will see a great difference between Trump’s campaign pledges and Trump’s policy as president?

Some statements he’s credited with - for example, that it would be all right if Japan and South Korea had nuclear weapons - were not policy statements or carefully thought out statements. I think he was shooting from the hip. I think we will have a better view of this, a better opinion of this, in the next four to six weeks when he has appointed his principle advisers.

Do you think Trump could reduce or pull out U.S. troops from Korea?

Will the Korea-U.S. alliance weaken under a Trump presidency?

My prediction is that the United States-ROK [Republic of Korea] alliance will remain firm. I don’t base that on any special knowledge of what President-elect Trump is thinking, but the overwhelming benefits to both countries is so strong that I think logic will prevail.

Do you think the North Korea nuclear issue will be high on Trump’s policy agenda?

Yes. I think the two major dangers of proliferation of nuclear weapons for many years have been North Korea and Iran. That is a matter of concern for every U.S. president.

Do you conclude that it is too late to prevent a nuclear North Korea, and that we have failed despite many years of efforts?

For the last dozen years or so, you’ve conducted something called the six-party talks. During that time, North Korea has gone from zero nuclear weapons to over 10. So it’s hard to conclude that the six-party talks were successful. I think they were not successful because… you have to treat North Korea as it is, not as it wishes to be. So, when I negotiated with them back 17 years ago now, that’s what we tried to do.

During that time, I spent a lot of time listening and I came to a conclusion what their goals are. No. 1, the primary goal, is to sustain the Kim dynasty. And No. 2 is to gain international respect. And No. 3, the obvious one, is improvement of the economy. But they have demonstrated they are willing to sacrifice No. 3 in order to achieve one and two. We should understand that: they are willing to sacrifice. And therefore, our policies for the last number of years of economic sanctions have been doomed to failure.

Where are we now? It is a fact that they have a nuclear arsenal. So they have achieved goal No. 1 as they see it, which is sustaining their dynasty, and goal No. 2, getting international respect with their nuclear weapons. They didn’t need a negotiation to get it; they got it with their own national weapons. But they did it at a terrible cost to their economy.

What do we have to do to deal with a nuclear North Korea?

Understanding that’s who they are, and what they are. If we begin negotiations again and say that the condition for negotiations is you give up your nuclear arsenal, it doesn’t take a genius to predict that they are not going to succeed. So if we want to negotiate again, we have to go in with an open agenda: we cannot have conditions. And secondly, our goal should be to limit the danger of nuclear weapons. And if we can get that done in a verifiable way, in a way that we think serves our interests, then we should be willing to give them some economic benefits.

Do you believe that we have to activate another Perry process?

If the Perry process means treating North Koreans as they are and involves understanding their goals, in trying to gear a negotiation to their goals, then yes I do.

In response to the threat of North Korea’s intercontinental ballistic missiles, should Washington consider a military option seriously?

A military attack on North Korea would, of course, threaten the regime there, and would lead to desperate action on the part of the regime, so it could lead to a nuclear response. Even if it didn’t need a nuclear response, even a conventional response could be devastating. It could cause many casualties in South Korea. So no American president will take that lightly.

In Korea, there are calls for building nuclear armaments or the reinstallation of U.S. tactical nuclear weapons in South Korea.

Building your own nuclear weapons, I think, will be a great error for Korea and for worldwide stability… it’s going to stimulate a nuclear arms race in Northeast Asia.

About having nuclear weapons based in Korea, which we did at one time, and which we can do again - why would we do that? Why would you want us to do that? The only reason I can think of is because you doubt we will really come to your defenses. It seems to me that the strongest guarantee that we will come to your defense is that we’ve got 30,000-plus American troops stationed here. I have in my mind not the slightest doubt of the iron-clad nature of the nuclear guarantee that the United States has provided over decades to South Korea.