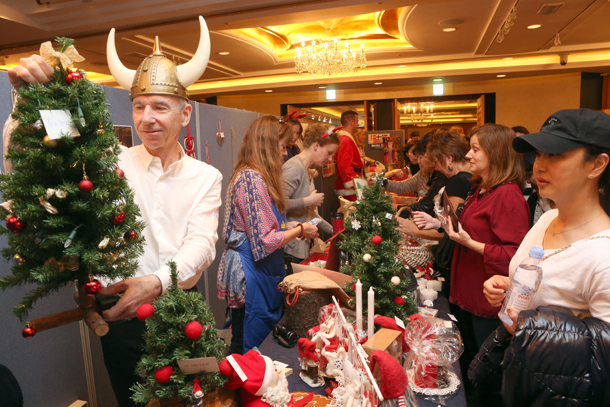 Visitors to the 54th SIWA and Diplomatic Community Bazaar shop for goods at the Nordic booth on Monday at Lotte Hotel Seoul in Jung District, central Seoul. [CHOI JEONG-DONG]

Hosted by Seoul’s largest international women’s organization, the annual event has raised more than 2 billion won ($1.7 million) since the 1960s, with most proceeds donated to over 20 local charities for the homeless, disabled individuals, senior adults and orphaned children.

This year, over 30 embassies and dozens of other charity groups, domestic companies, women’s clubs and sponsors took part in the 54th SIWA & Diplomatic Community Bazaar.

Nehal Hanna, wife of the Egyptian ambassador and president of the Ambassadors Spouses’ Association in Seoul (ASAS), praised the occasion for offering a “wonderful chance to introduce different countries to the Korean public,” and said the most popular item she sold that day at the Egyptian booth was scarves, which all sold out within hours. Her food corner included Egyptian sweets and falafel.

At the Latvian booth, Rina Okumura-Vaivara, wife of the ambassador of Latvia, which newly opened its Korean embassy this year, said berry jam, honey and linen towels were the best-selling items of the day.