Choi shops around after becoming an FA

Choi shops around after becoming an FA 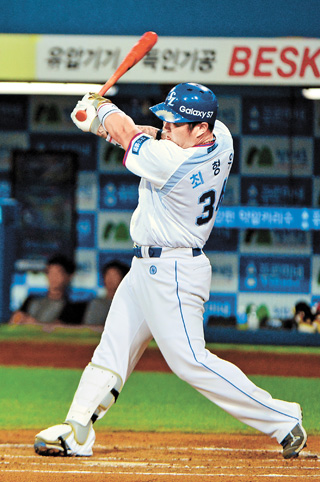 Choi Hyoung-woo, outfielder of the Samsung Lions, witnessed the peak of his career this season. In the FA signing period, Choi may land a jackpot deal and set a new FA contract record. [NEWSIS]

Choi Hyoung-woo, a slugger from the Samsung Lions who was declared a free agent (FA) after the season, is hunting for a team to offer him a lucrative deal. As the runner-up for the 2016 Korea Baseball Organization (KBO) MVP title, he may have a shot at a jackpot deal akin to the one Park Sok-min of the NC Dinos signed last year for 9.6 billion won ($8.2 million), a record in KBO FA history, but at the moment, Choi is taking his time and assessing his options.

During the KBO award ceremony on Monday in Seoul, Choi took home three different trophies, his first batting title as well as titles in runs batted in (RBI) and hits, a triple-crown befitting the solid stint he had during his plate appearance this season.

Choi outshone other Korean league hitters by batting .376 throughout the season. He also led the league in RBIs with 144, and in hits with 195. He’s essentially peaked out as a hitter, but according to his latest statement, Choi looks to be in better shape in the seasons ahead.

“I have the same goal at the onset of the spring camp each season,” Choi said during the award ceremony on Monday. “I tell myself, ‘let’s be consistent this year, let’s hear people say that I played consistently throughout the season.’ I started out the year with that mindset and I kept this in the back of my head. I will do my best to stay consistent until the end.”

Indeed, consistency is the suitable word to describe his career. Choi has been tallying over 100 hits since 2008, after he was relieved from his military duty. Choi is the only Korean hitter at the moment to go three straight seasons with a .300 or better batting average (BA), 30 homers and 100 RBIs. Other than Choi, only Lee Seung-yuop of the Lions, Park Byung-ho of the Minnesota Twins of the Majors and Eric Thames of the NC Dinos have demonstrated such consistency.

In the MVP award race, the 32-year-old veteran slugger obtained 530 points out of 816 total, trailing behind Dustin Nippert, the starting pitcher for the KBO champions Doosan Bears and the winner of the MVP honor, by 112 points. Had the Lions not finished the season near the bottom of the standings at ninth, the outcome of the race may have been flipped.

The Lions, who have claimed five pennants and four Korean Series titles since 2011, ended the season with 65 wins and 78 losses, the worst they’ve ever done in the club history. The fall of the KBO elite was a major surprise, but Choi believes what goes down must go up.

Although he’s conceded the MVP title to Nippert, finishing the race as runner-up undoubtedly upped his value. In fact, some conjecture that it is going to be Choi who may reset the KBO record to become the priciest FA.

For the Lions, Choi is a valuable asset in their batting lineup. As the cleanup hitter with a knack for hitting long balls, choosing to keep Choi on the roster may well determine whether they stand high in the league rankings next season. However, with the sponsorship change, it is questionable whether the Lions will be able to afford the slugger.

There is also a slim chance that Choi may end up overseas. “I am not looking too much into playing outside Korea, but there are some clubs that are interested,” Choi said on Monday after the award ceremony. Earlier, Choi said that he will decide whether to stay in the domestic league or try his bat overseas in one or two weeks.

“I just want to get it over with,” Choi said about the current situation regarding his FA deal. “I cannot elaborate since my agent is working on this, but frankly, I’ve love to ink a deal tomorrow, if possible.”

Choi added there isn’t any club who’s offered him a deal that intrigued him.