Korea dominates Uzbekistan 2-1 to secure second in the group

Korea dominates Uzbekistan 2-1 to secure second in the group 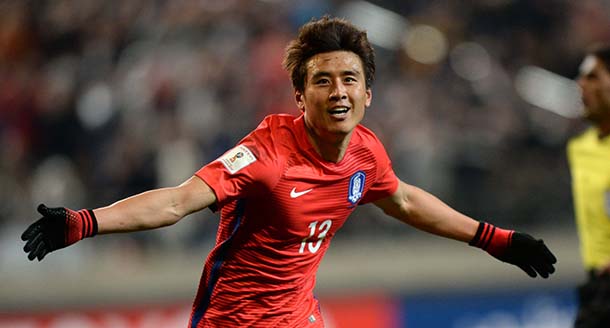 Koo Ja-cheol of Korea celebrates after scoring the go-ahead goal during the World Cup qualifying match on Tuesday against Uzbekistan in Seoul. Boosted by Koo's goal, Korea took down Uzbekistan 2-1. [NEWSIS]

Korea took down Uzbekistan 2-1 on Tuesday, earning the crucial three points in its quest for the ninth straight World Cup berth.
Tuesday also happened to be the birthday of Korea’s manager, Uli Stielike.

Coming out of a 2-0 win against Canada in an international friendly last Friday, Korea, ranked No. 44 in the latest FIFA rankings, was hoping to extend its winning pace to Tuesday’s match against Uzbekistan, No. 48. Tuesday’s home game at Seoul World Cup Stadium was also the last match of the year for Stielike’s squad.

Korea started out the match with Lee Jeong-hyeop up front, a forward from Ulsan Hyundai FC who also scored a goal against Canada last Friday. Son Heung-min of Tottenham Hotspur of the English Premier League, the team’s ace, also started the match on left flank.

With Ki Sung-yeung, the team’s captain, in the center as the playmaker, Korean players managed to dominate ball possession, constantly knocking on Uzbekistan’s goal to bury one in.

But to everyone’s surprise, it was Uzbekistan that took the lead first. Capitalizing on an error by the Korean defenders and their goalkeeper, Kim Seung-gyu, Marat Rifkatovich Bikmaev of Uzbekistan lobbed the ball over Korean players to score the first goal of the match.
The goal left the players, coaching staff and fans at the stadium utterly speechless. And it took Korea a while to regain its pace.

Stielike decided to shuffle the deck, drawing Kim Shin-wook as the joker in the 67th minute, puting him as the target man. As soon as Kim stepped on the pitch, Nam Tae-hee received a floater from the side by Park Joo-ho and headed the ball in past the goalkeeper, Aleksandr Lobanov, for an equalizer.

Koreans stayed on form after that and finally, with five minutes to go in regulation, Kim laid the ball to his left off his head upon receiving a pass from the center field. Koo Ja-cheol, midfielder from Bundesliga’s FC Augsburg, struck the ball with his left foot and drilled it past Lobanov to score a go-ahead goal.

“We focused on taking three points from the game and nothing else,” said Koo, who was selected as the Man of the Match after the game. “And finally earning those three points and stepping up in the group standings, I feel good. After conceding the first goal, we felt pressured. But I think this will win us back our confidence. I myself am happy to have scored the winner as it has been a while since I scored a goal. I thank the fans for coming out here to support and cheer for us.”

After Tuesday’s win, Korea is ranked second in Group A after Iran.