Hope in the streets

Hope in the streets 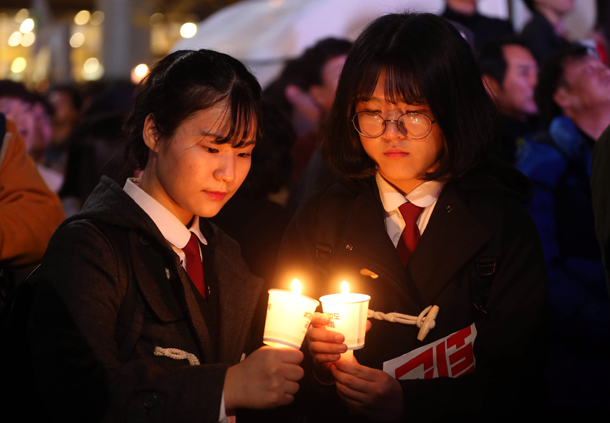 The crowd of one million that lit up the downtown streets of Gwanghwamun Square in central Seoul on Saturday appeared to be at a festival instead of rallying to oust the president. They roared back in thunderous cheer to the addresses broadcast on loudspeakers. No one turned violent. They were beaming and enjoying themselves.

But what drew them to the streets on a chilly November weekend was rage. They were outraged by the way their elected president abused and squandered power to enrich a greedy inner circle and utterly ignore the fundamentals of democracy. They were appalled and have been in disbelief that such irrationality and irregularities could have happened in their society.

A month ago, I wrote a column advising the president to meet with top conglomerate chiefs like Chung Mong-ku of Hyundai Motor Group and Jay Y. Lee of Samsung Electronics. I thought the president could have come up with ideas to revive the economy after listening to such men. I realized later how naïve and foolish I had been to raise such a suggestion. The president did meet with conglomerate heads separately a year ago. But it turns out the meetings had an ulterior motive.

The president met with seven conglomerate heads for two days in July 2015. Chung of Hyundai and Lee of Samsung were on the list. It turns out ways to seek future growth and keep ahead in industrial competitiveness was not the main topic. Prosecutors have questioned the corporate chiefs. The president will be next to be interrogated. The president did not plead for cooperation from top companies to help the country fight economic challenges — but for money for foundations that are suspected to be giant slush funds for her life after the presidency.

The economy is in a pitiful state. None of the big corporate brands is doing well. The two major conglomerates — Samsung Electronics and Hyundai Motor — are struggling. Korea Inc. is treading on thin ice. Yet the Blue House squeezed money from 53 companies. The companies cannot complain because they probably paid up in expectations of some kind of favors in return. What companies would want to newly invest and hire under such circumstances?

Our startup sector and the entertainment industry have also been fatally wounded. The president’s signature projects to promote a creative economy and cultural renaissance are now revealed to have been designed to serve the clan of Choi Soon-sil, the president’s overly powerful friend. The legislature will probably slash budgets in those areas. The ambition to turn the country into an innovative and cultural powerhouse has been squandered by corrupt sponsors.

The president’s father Park Chung Hee is still respected as a successful leader despite being a strongman because he made the economy strong and people richer. His daughter has ruined the economy. She solved nothing and wrecked havoc on future prospects. If not for the grave damage to the economy, we would not have seen one million citizens on the street.

We have witnessed some seeds of hope in the streets of Gwanghwamun. The young generation that complained of this country being a “hell Joseon” and older generation became one in the streets. The citizenship has matured. The staggering scandal has proven that those abusing their title and power will eventually face the music. There is another hope. We have earned time. If all these shady irregularities had been kept under wraps, we would have wasted another five years. There is yet hope in this country.


*The author is the industry news editor of the JoongAng Ilbo.