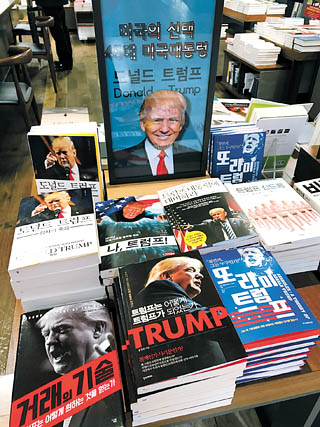 Kyobo Book Centre in central Seoul has reserved a space for a slew of books about U.S. President-elect Donald J. Trump. [SEO JI-EUN]

The Korean government stressed that economic ties with the U.S. will continue to strengthen and it expects further cooperation on large-scale infrastructure projects and the energy sector with the new administration of Donald J. Trump.

Choi Sang-mok, vice minister of strategy and finance, during a seminar held in central Seoul on Tuesday stressed that the bilateral trade agreement between Korea and the U.S. will not only expand the trade between the two countries but also contribute in creating more jobs for Americans.

“The Korea-U.S. Free Trade agreement has increased trade and investments and led to creating jobs in the U.S.,” said the Korean vice minister. “Samsung Electronics [alone] has hired 15,000 throughout the U.S.

“There are 3,500 working at Hyundai Motor’s factory in Alabama and another 3,100 at Kia Motors’ Georgia plant. Since the free trade agreement was ratified, Korea’s export to the U.S. has more than doubled while the choices that Korean consumers make have broadened.”

President-elect Trump has repeatedly stressed during his campaign the need for renegotiation of trade deals, including the Korea-U.S. Free Trade Agreement.

There have been reports that the FTA has positively influenced trade between the two countries, keeping U.S. as Korea’s second-largest trade partner and its leading investor.

Korean companies benefited from the bilateral trade agreement with the U.S. as major exported goods including automobile and mobile phones on average grew 5.1 percent last year, according to a study by the Institute of International Trade released in March. This is a stark contrast to the 7.8 percent decline in major goods exported by Japan and China’s relatively slower growth of 4.2 percent. In fact electronics products export last year grew 12.5 percent while machinery exports grew 12.4 percent.

“Even under unfavorable conditions, including the slowing global economy and the low crude prices, Korea’s exports in 2015 were able to perform with stability thanks to the goods that benefited from the FTA with the U.S.,” said Park Ji-eun, senior analyst at the international trade institute.

However, a recent study by the Korea Economic Research Institute showed that if the renegotiation suspends free trade between the two countries, Korea’s exports will suffer and face accumulated losses of $26.9 billion in the next five years with 240,000 losing their jobs.

Since Election Day, the Korean government has set a strategy to convince the new U.S. government of the benefits of the bilateral trade agreement. Korea’s vice minister also stressed the potential for cooperation with the incoming administration.

“The economic cooperation between Korea and the U.S., even with the new administration, will likely to continue and expand on the foundation of past cooperation,” Choi said.