In the National Assembly on Tuesday, a group of lawmakers from three opposition parties and independent lawmakers hold a symposium on legal proceedings to impeach President Park Geun-hye. [NEWSIS]

Moon Jae-in, who lost narrowly to Park Geun-hye in the 2012 presidential election, said Tuesday he will start a national movement to end her presidency.

The former chairman of the Minjoo Party of Korea held a press conference about the leadership crisis and the abuse of power scandal involving Park and her longtime friend Choi Soon-sil.

Moon, who is the presidential frontrunner of the main opposition party, said he has shown patience - despite criticism of his silence - because he wanted to minimize chaos in state affairs. He said he had hoped Park would exit with dignity.

“Park, however, rejected the sincerity,” he said. 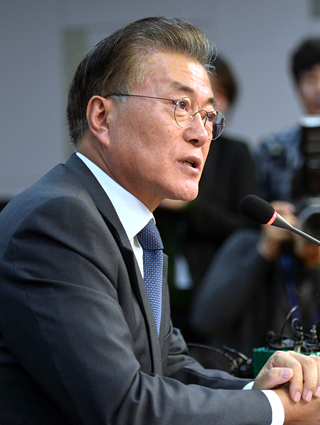 Referring to a million-person rally held last Saturday to demand Park’s resignation, Moon said, “The time has come to the point of no return.

“Until Park declares that she will step down unconditionally, I will start a nationwide movement to oust her,” he said. “Through an emergency consultative body of all opposition parties, civic groups and regional leaders, I will work to expand the movement nationwide.”

While some politicians, including former chairman of the ruling Saenuri Party Kim Moo-sung, have floated the idea of impeaching Park, Moon said what the public wants is Park’s voluntary resignation.

“The overwhelming majority wants her immediate resignation. Impeachment takes a long time,” he said. “As soon as she comprehends the public’s sentiment, she must immediately say she will step down. That is the right thing to do for the country and the people. If she is incapable of making that decision and forces the National Assembly to impeach her, she truly is a bad president.”

Moon stressed the resignation must be done in an orderly manner, proposing a nonpartisan cabinet to run the country until the next administration is elected.

If Park resigns immediately, Prime Minister Hwang Kyo-ahn, appointed by Park, will run the country in the crucial weeks leading up to a presidential by-election. If Park resigns, her successor must be elected within 60 days.

If Park is impeached, her presidential power will be suspended immediately and the prime minister will serve as acting president. Then the Constitutional Court will take up to 180 days to rule on the impeachment’s legality.

Earlier, opposition parties said Park must publicly declare her intention to step down and the National Assembly should appoint the new prime minister, form a new cabinet and create a timetable for the presidential by-election.

It remains to be seen if Moon’s initiative to end Park’s presidency will mend the rupture in the liberal alliance. After Choo proposed a bilateral meeting with Park Monday morning without consulting the People’s Party and Justice Party, the threeway opposition alliance was briefly shaken. Even Minjoo lawmakers condemned Choo’s abrupt and unilateral plan and she canceled it Monday night. The Blue House said it was sorry that Choo recanted her proposal, urging the opposition parties to act more responsibility to normalize state affairs. Presidential spokesman Jung Youn-kuk said Park is mulling all possibilities to resolve the crisis, including another apology to the nation - which would be her third - but denied that resignation is an option.

Choo posted a statement on Facebook and apologized for her behavior. She said Park’s resignation is the only speedy resolution to the current crisis and vowed to restore the alliance with the People’s Party, Justice Party and the civic groups to end Park’s presidency.

The popularity of the 63-year-old Moon has steadily risen. The latest poll by Realmeter said Monday that Moon was ranked the highest among presidential contenders for the 2017 race, beating UN Secretary-general Ban Ki-moon outside the margin of error for the first time.

Ban was ranked second with 17.2 percent. According to the survey, Moon’s rating went up for three weeks in a row. Ahn was ranked third.

While Moon maintained a reserved approach until Tuesday, Ahn has already started a petition to demand Park’s immediate resignation. After hosting a session in front of Seoul Station on Tuesday, Ahn responded to Moon’s offer to cooperate.

“I will meet with everyone, whether from the ruling party or an opposition party, who shares my goal,” he said. “Park’s resignation will save the country from crisis, so we must work together.”

Moon and Ahn were estranged after Ahn conceded his presidential bid to Moon in the 2012 race.

They temporarily worked together in the main opposition party, but Ahn left, created his own People’s Party, and scored a major victory in the April general election to become the third largest political power.

Justice Party Chairwoman Sim Sang-jeung said Tuesday that leaders of the three opposition parties must meet to coordinate. “We must concentrate our efforts to present a single plan to normalize the country,” she said.

She proposed that the three parties should jointly hold a general assembly of lawmakers.

As of now, the three parties control 165 seats in the 300-member National Assembly.

While the opposition parties are realigning, an internal rift in the ruling Saenuri Party grew wider. Chairman Lee Jung-hyun, an ally of Park, was facing demands for his immediate resignation.

Earlier this week, Lee said he will resign by Dec. 20 and a new leadership election should take place in January.

Meanwhile, Saenuri heavyweights who previously expressed their animosity toward Park created a new emergency leadership to protest Lee’s control of the party.